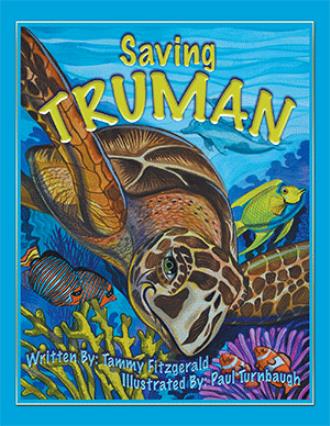 Last summer, when Luca and his dad took their boat out fishing, Luca spotted something splashing in the distance. They moved a little closer to check it out, and Luca shouted, “Dad, that is a sea turtle up ahead, and it looks like he’s having trouble swimming.” “I see, buddy; he doesn’t look good. You’re right; he is in trouble.” Luca’s dad turned off the motor and slowly moved the boat closer to the turtle. He looked weak and was barely moving. Luca’s dad radioed the Coast Guard to report an injured turtle. The turtle’s injuries were so bad that Luca would not take his eyes off him until help arrived.

Saving Truman is the story of a sea turtle’s struggle to survive an injury caused by human impact. By his side is an 8-year-old boy named Luca, who earlier rescued the turtle from peril and later became this lucky turtle’s hero. Luca’s dedication to the rehabilitation of this 150-pound turtle evolves into a commitment to save this endangered species from extinction. Luca discovers that these lovable ancient mariners will struggle to survive without human kindness and intervention. Saving Truman shares an emotional journey of this sea turtle’s rescue, rehabilitation and his inspiring, heartfelt release.

Tammy Fitzgerald’s passion for writing whimsical poetry led to creating greeting cards for her own Etsy shop. A passion for sea turtles led to writing this book. Living in coastal Virginia Beach, Tammy feels a strong sense of responsibility toward caring for marine life and their environment. Her outlook on life is simple: Treat all God’s creatures with kindness, especially the helpless; remember, those with four legs, fins or flippers rely on us to be good stewards of their environment to survive.