Children of the Storm 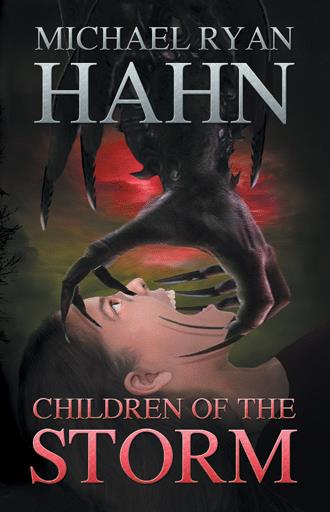 CRUNCH, SNAP, WHAP! Imagine the sound of a heavy body falling through trees and striking the earth. That’s what WHAP means.

WHAP! Another body, or thing, lands, close. WHAP! Another we don’t-know-what lands far away. Every boy’s face wants to catch clues but the dark air shares no secrets.

Mr. Zims has never been so scared in his life. “That’s the tornado alarm! Run to the Dining Hall! Hustle, boys, go!” He kicks out the campfire and shoves two boys at a trail cut through brush. He finger-counts the rest as they tangle through. WHAP! Another hard impact nearby. Mr. Zims chugs and wheezes after his keep. He wasn’t built for speed.

Beyond their campsite is an open field surrounded by woods, acres long and acres wide.

A hundred Scouts from different Troops burst from their pockets of forest and every-man-for-himselfs-it across this field toward the beckoning tornado alarm at a cabinesque Big Dining Hall, Camp’s sole building, a good quarter mile away.

Raphnick runs faster than anyone. He will be the first in. But the rest of our Troop, unlike the scattered boys, runs as a pack. Most of the older boys do their duty -- hands are held, the little ones are dragged, words of encouraging haste are shouted. Because:

Above, the purple clouds swirl around a CIRCLE OF PINK SKY. The pink light throbs like slow heartbeat, almost patient -- in great contrast to the violent wreath of clouds encircling it.

Mr. Zims trails, smoker-coughing and gasping. WHAP! A closer drop. A prehistoric, guttural snort draws his worried attention as he slows to catch his breath... another snort!

He lurches like he’s been stabbed in the back -- but there’s nothing there. He collapses.

In the thick of the herd, Moose carries Chip. He won’t let anything happen to him. Moose barks at him, “You recording that crazy sky?”

“No, your cell got cooked!” Chip shouts.

“What do you mean, ‘cooked?’” Moose yells back. Chip shows him the dead cell. The screen is burnt.

Chip looks back and sees Mr. Zims lying on the grass, stiff with a leg cocked up, dragged by something invisible toward the woods. Like a lion pulling prey but there’s no lion.

More WHAPS of invisible falling what-are-theys invade and a chorus of incessant snorts swarm after the scramble of boys.

One small boy lurches and goes down, paralyzed and gasping, eyes like saucers. He gets dragged away just like Mr. Zims. Same fate for the other slow boys and very slow Scoutmasters.

In the big Dining Hall, a pimple-faced Staff Member who doesn’t exactly exude confidence perches at the double doors atop hundred-year-old steps waving people in. Tens of dozens of more boys stream in from every direction and funnel into the choke point of these doors.

Another Staff Member kid wheels a hand crank on a telephone pole outside. That’s the old-school, manual tornado alarm.

Pushing, swearing, crying -- you’d be surprised how many Scouts can fit into a two-hundred-seat Dining Hall. About four hundred.

It’s damn dark in here. You can only pick up some fragments of chatter: A scared boy somewhere, “What keeps falling from the sky?” An even more scared Scoutmaster somewhere else, “No power. It’s all fried like when a nuke pops off. Not nothin’ works.”

Chip squirms free of Moose and weaves to a window. The precious rare space on the walls that isn’t old wavy glass is packed with trophies and sigils of historied honor. The floor is even more cramped with wooden tables and chairs.

Everyone wants to see what’s going on and the mob moves like an unthinking wave. Chip gets nudged past windows and shuffled down the line by bodies that don’t even realize they’re doing it, until he finds himself near Raphnick and Moose, who eye the sky. Moose mutters, “I don’t know but not a tornado.” Raphnick nods, then notices Chip and regards him as a detestable insect he forgot to squoosh. Chip quickly finds a new spot to be as Raphnick gets distracted by:

Boys crowd out Chip from the windows. Chip can only see bits and scraps through elbows and old wavy glass. The puzzle pieces he gathers are: Airmen shoot rifles from the truck... but at what? The truck slams to a halt and the Airmen barrel out. One ignites a flamethrower and unleashes hell on something out of view. This fire-slinger scatter-shoots like he’s outnumbered.

Snorts turn to howls and gunfire out there. A hush strangles the boys.

Chip squeezes through arms to look out the double doors -- and stumbles back as Ari, a young airmen and 2nd Lieutenant not much older than them, barges in. The darkness masks his youth and with that uniform lends him a mystifying authority none of these boys will ever forget.

“Does this building have a basement?” Ari coolly asks. Moose stands on a table and points to a side door. Ari nods. “Get in it. Is there a gun here?”

Blank faces. Nothing but BB guns and arrows since 1954; everyone knows that. Ari loses hope. “Are there no adults?” Silence. No faces over seventeen made it inside. Ari swallows back his fear. “Okay, who can use a handgun? Confidently.”

The ‘confidently’ sticks hard and only a few hands rise. Ari points to the tallest one near the back: Raphnick, who smiles.

Chip slips in front of Ari and talks so quietly no one else can hear. “Not him.”

At summer camp, a combative collection of Boy Scouts becomes the first to face a shocking event out of a horror film: a bizarre storm mysteriously appears over the forest one night and spins above their camp. This otherworldly tempest moves in a way that no normal storm should: willfully.

Predatory monsters that can only be seen in reflections rain down to earth wherever the storm goes. They bite and paralyze their victims before feeding on them and prey on everything that moves. The storm soon races its way to suburbia and into the city, leaving chaos and few survivors in its wake.

One of the Scouts is brought together by the mayhem with other young survivors from different parts of town, and these kids, who would never have met otherwise, become fast friends as they come to believe they can survive—or even stop—the storm. But first they must outwit adults who would rather hurt them than follow them. Invisible monsters are not the only things that kill.

Real childhood events, that have been somewhat exaggerated, inspired Michael Ryan Hahn to write this story. He holds onto his inner child and doesn’t forget how scary and dangerous growing up can be. The story mixes gallows humor with frightening realities and combines a grand scale, horrific monster adventure with the point of view of kids who see the chaotic adult world as it really is.