Legend of the Fire King 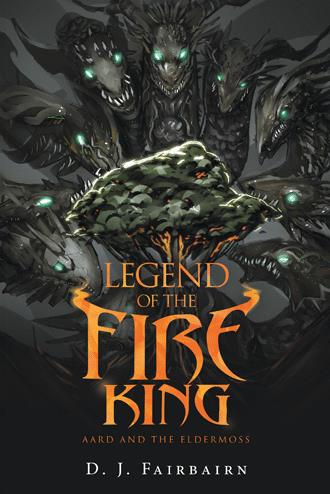 It was written that out of the formless void came life, but what if the darkness engulfed life once again? Would the world become anything more than a mere shadow in the wrinkle of time?

Day Y012. It seemed like only yesterday, the deafening sounds of blades clashing, explosions about my person, my comrades being ousted before my eyes. The cries of mothers and infants drowning out the peacefulness in my soul. I’d been born for such a time as this, and yet, it wasn’t enough bloodshed. It was merely a drop in the bucket for the vagrant Empire. A simple tithe to the Gods of Arcéna. I’d only believed in one God and that was Father. Father poured into each of us the gift of life and granted us the benevolence to direct its flow. The prophets remarked this era as the first judgement. A rather trivial necessity for the atonement of our sins as Darks. My spouse lay in my arms, flesh skewered by the cold, brazen steel, her face a tarnished heap of mangled flesh and hair. A combat medic tried everything to cease the bleeding, but it was no use; her most recent pregnancy had exhausted her, and I'd lost everything that fateful day. Oh woe, must man suffer the countless tragedies of war, human greed, and needless judgement?

Day Y015. The buildings of Grand Arcéna stood tall among the rubble of the city. Painted before my young child was a picture of a forgotten people, poverty stricken. And yet, instead of mourning, a disturbing chill of anger permeated the air. The seething rage of countless young men and women suffocated me. The stench of rotting blood crept into my infant's nostrils as his cry was seemingly the only innocence my heart knew. What would it take to rectify the wrongdoings? How much would it take to rebuild our nation, scattered as we were across the land our forefathers had slaved to build? Who would rise to the challenge of leading our people? The inner machinations of my mind were like a labyrinth, with no end in sight. But alas. Hope abounds.

Day Y019. My son and I were bathing in the Pool of Sorrows when I heard a cry from the heavens. It spoke directly into thine ears. “If you are of me, you will sacrifice your son for the deliverance of your people. Only then will your power be manifest in you.” It had not occurred to me what this meant. Fate is a terrible mistress. Behold, the cavalry has arrived. We were commanded by the King’s men to face slaughter or relinquish our sons to the Empire’s cavalry's platoon. My son, my only son. How could this be? I'd lost my heart and I'd lost my seed. Welling up within me was the very bloodthirst that the Empire exhausted on my people. Bewildered, my son cries within the arms of the enemy, seeming to stir a dormant beast. My gaze fixated on the armored enemy before me. My hands plunged into their faces, gouging out their eyes. I put my hand to the spear and defended my ground. However, my resistance proved futile as reinforcements arrived. I was stripped, beaten, and bruised—shackled by the captors that also separated me from my son. I looked on as he grabbed the cage he was placed in, traumatized with fear.

Day Y021. Imprisoned. To be tortured every hour on the hour. Electrocution, beating, public humiliation, starvation, just to name a few. I could feel it slipping. The feeling of hope—nonexistent. As the remnants of my life flashed before my eyes, I began to have nightmares. In isolation and eventually on death row, I was given books to read and one meal a day. I expanded my knowledge of the teachings of Witness Hana and a mystical figure called the Fire King. I ripped out pages of the books I'd read, ranging from politics to the dark arts. I stumbled upon meditation techniques and learned to cultivate something called Aard. Seemingly, I had very limited time but soaked up the teachings like a sponge. It’s as if I cared little about my situation but focused on honing this miraculous inner substance…

Day Y024. Hallucinations or spirit contact. “Nousah, the spirit mind, Somah, the spirit body, and Ousah, the spirit essence—these are the essence of all life. It began with the ElderMoss and the teachings of Aard. Aard can in essence sustain the life of all that is living and deceased,” said a ghostly figure before me. I couldn’t believe that someone else could exist in these confines. “Do not be afraid, my child. For I am one of the witnesses. I am Yoko the Hermit.” The figure placed on my forehead his long, talon-like fingers. My body lay still, but my spirit left my body. Instantly, I was transported to stand before this mighty tree in the middle of nowhere. The streams were golden, teeming with life. Chirps of large birds, roars of mighty lions and creatures I'd never known could exist. This seemed unreal. A large, fire-like door seemed to guard the tree but not burn it. Yoko guided me to the door as I seemed to float through the air.

......
Day Y027. Day of judgement. It has come. My day of death. It has been many years since that fateful encounter with Yoko. My body had grown weary and emaciated, yet my spirit and mind were perhaps sharper than any blade. The Empire’s officers strapped me to a jacket and escorted me to the death chamber. I don’t quite remember what happened after that, but I do recall standing outside the building covered in blood and laughing with the head of one of my enemies in my grasp. I had finally obtained that which I sought most: power. My son, I hope one day I can see you grow into a strong young man. Forgive your father. In the distance, I saw my son in the living quarters of the Palace of Arcéna, cared for by an eager, pale, blonde-haired woman. I couldn’t bear to face him. Not like this.

In the distant future, technological advances near their climax. Mankind has imploded on itself through numerous wars assuming themselves as Gods. After the tragedy of the sixth KINGS war, two brothers, representatives of a world torn, must work together to rekindle their world. Can they convince the world that Nod is still needed, or will the Fire Kings return incite an evaporation of society through a final war?

D. J. Fairbairn lives in New York and is an avid bassist, bodybuilder, and artist. His work has been featured in the Koh-i-noor blog for up and coming talent. He currently studies at Tufts School of Medicine and is working on the second installment of this series.