Why Did You Die, Mrs. Adams? 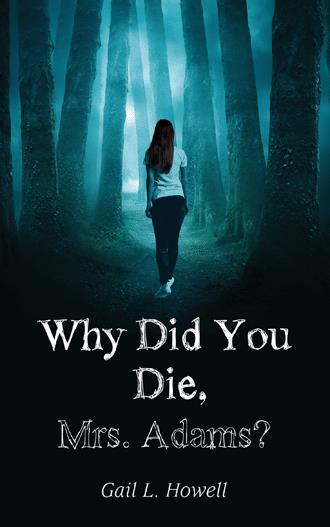 I was born in a little town of no consequence. The only notoriety being, I had no father or at least one present to acknowledge my existence. For that one fact, my mother was talked about and discussed the daily luncheons by the town women. As far as I knew, to correct the gossip, it was just us. My grandmothers folks were all gone, having lived long lives, long before me. They just weren’t talked about, I knew the history was French, English and who knew what else, it just wasn’t discussed. They built the house we lived in; my grandmother Martha Davies Donnelly was born in this house. The house had history and my mother held her head high, went on with her life as if nothing mattered. When my grandmother married Henry Donnelly they moved into her family home and had two children, a son and a daughter.

Their daughter was my mother, her name was Evelyn Donnelly. I thought she was pretty, I never told her that, we weren’t close, I mean mother/daughter close (I called my mother Evelyn) immediate family, her mother (my grandmother), And your brother Jeff, supported us. Evelyn and I live with my grandmother in the house her father built, I knew what it was like to be loved. Uncle Jeff and Gram doted on me, my mother not so much.

By the time I was old enough to discover certain facts about my mothers life, it really didn’t affect me. The reason she sat at the window most days and quietly look to the sky only left me wondering what the heck it was she was thinking about. Those days were often but, as a young girl who really didn’t care, I went on with my young life as if there weren’t enough hours to fill my space. My space was the woods behind my house.

The house my great grandfather built was a small one story home with a large attic. I imagined in its day, It looked like a darling little cottage painted white, today, now I said worn gray with a front porch that I loved. Grabbing I would sit on wicker chairs that were pretty old but sturdy. My gram’s dad died long before I was born. On my 13th birthday, Uncle Jeff totally redid the entire house inside, including renovating the attic, which became my bedroom.

The best part about the house was the 3 acres of land that bordered the woods and became my playground. Beyond the fence, it seemed a stretch for miles. The tall maple trees with branches so wide you could climb and sit for hours which I did often, it was the quiet I desired when I needed to think or just dream. It wasn’t as though I was a lonely child, I had family, I had love but, I was often left by myself to create my day. Of course, I was 13 at the time and now it’s 16, I didn’t go as often as I would’ve liked.

Today was going to be one of those days, I just needed to be outside and alone in these woods. I yelled to Gram that I’d be back later and flew out the door. Once there, I noticed the green all around me as well as the colorful wildflowers that seem to grow in the areas I didn’t inhabit. The squirrels with their long bushy tails with scamper nearby, the deer at dusk were too many to count. It was in the silence of my days in the woods that I found myself. I found laughter, joy and bodily rhythm as I danced around those trees, and at times climbing them.

If you were to view the scene you could only imagine a girl with long lanky legs on a willowy body that led to a freckled face framed by a mass of red, red hair that fell below my shoulders. If it wasn’t for that wild red hair blowing free as the wind, I might’ve been a boy. That is what you would’ve seen, but no one ever came, no one ever knew I was even there except for my grandmother.

Why Did You Die Mrs. Adams? is an intriguing coming-of-age novel following Samantha, a high school junior trying to navigate the typical trials of being a teenager. Samantha’s mother pines for a lost love, and she has no father present to lean on. Due to her mother’s lack of emotion, Sam hasn’t gotten the attention she’s wanted her whole life. Thankfully, her Gram and her Uncle Jeff are the only family she needs. Intense trauma strikes when, in one week, she experiences the deaths of her mother and Mrs. Adams, a nearby neighbor friend.

Her grief morphs into anger and curiosity when she becomes consumed by the need to solve these two mysterious deaths. After frustrating her family, Sam enlists her friends Lois and Josh to outwit an alleged killer. Between the three of them, they are determined to solve crimes that Sam has magnified in her mind.

Murder isn’t the only mystery, though. Sam also seeks the father she has never met, wondering if he’s out there somewhere. Intrigue abounds, as Sam becomes an obsessed investigator, all while fighting her grief and managing her own demons. Who is the killer, and will Sam be saved or shattered by the discovery?

Gail L Howell is the author of Sarah Meets Her Cousins by the Sea and Sarah and the Blue Sled, both children’s books. This is her first novel. Several years ago, she retired from a lucrative career in sales, having traveled throughout Europe in the plastics industry. Once retired, it didn’t take her long to return to her love of writing. She lives in Florida with her husband.