The End of Fear

Vulnerability as a Spiritual Path for Realists 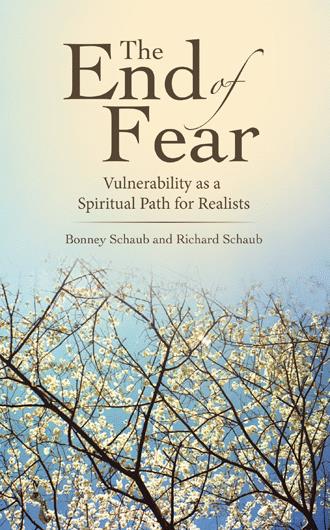 The Cause of Fear

And so, from hour to hour, we ripe and ripe,

And then, from hour to hour, we rot and rot,

And thereby hangs a tale.

It's well-known that our hardwired response to stress, originally designed to preserve our physical safety in a world full of predators, can play havoc with our well-being in the kinds of threatening situations modern life presents. A rush of adrenaline may have enabled prehistoric man to give a saber-toothed tiger the slip, but the executive in the meeting room does not benefit from tensed muscles and a racing heart. At first glance, then, it looks as if our survival instinct is out of sync with reality. But this isn't true. It is reacting to a deeper reality than the critical remark or the job interview: it is reacting to reality as it really is.

Our survival instinct is operating from a primal truth: that life is a wondrous and strange experience in which everything and everyone you see, including yourself, is subject to change and loss at any moment. This is true for every living being without exception. No religion grants you an exemption, and no amount of money or status can change the fact of your essential vulnerability in this world. This is Buddhism's “truth of impermanence.” This, what Freud called “our helplessness,” is the defining characteristic of the human condition: that we live with the awareness of our mortality.

Psychiatrist Aaron Beck, the pioneering founder of cognitive therapy, views the awareness of death as the root of all our anxieties: “In understanding anxiety, we should think of the symptoms not as foreign experiences but as expressions of basic, primal functions.” The monsters that come to take children away in the night are storybook models of the truth that one day you and I will be taken from our present lives. And before we are taken, we will witness it happening to others, including those we love.

Looking at it in this light, we see that our fears are not unreasonable after all.

He who can look at the loveliness of the world, and share its

sorrow, and realize something of the wonder of both, is in

While we share our vulnerable condition with all other living beings, our human capacity for self-awareness adds to its impact. As the poet Wendell Berry put it, we live with the “forethought of grief.” We can't be sure, but we may be the only creatures on earth who go about our lives knowing that one day we won't be here.

Some people have a higher degree of sensitivity to this truth than others; they are more finely attuned to the possibility of change and loss and feel it more deeply. For many people, the end of summer is just the start of autumn, but for the sensitive ones it brings a melancholy as the light and heat give way to cooler days and earlier dark: the passing of the season touches in them an awareness of the passing of time and the inevitable ending of things. This kind of melancholy is not depression, but a deep movement of feeling that is distinct but beyond words. When Spanish flamenco or Portuguese fado singers let out their characteristic minor-key wails, they are giving voice to that feeling moving in them. I once heard a flamenco singer say that every one of his songs was a lamentation on the inevitability of loss.

We begin to sense the possibility of change and loss even as children, and some children are sensitive to it in their own way, asking intuitive and profound questions at a very young age about where people or pets go after they die. A few weeks after the death of her great-grandmother, whom we called GG, our 3-year-old granddaughter came up to me while I was raking leaves and asked very casually, “Is my GG dead?”

Then she asked me if my mother was dead, and I said yes.

She was quiet for a moment, and then she asked me if my father was dead. I answered yes again, and I wished in that moment that I could see into the heart of her questions to grasp where she was going.

She then announced with confidence, “GG's not dead—she died.”

That stopped my raking, and we sat down on the pile of leaves together.

I assumed she was just getting confused with her language, and so I modified her words and said them back to her: “Yes, love, she died, and now she's dead.”

For the moment, she had nothing more to say. I gave her a hug, and she threw some leaves up into the air and went off to play in the garden.

A week later, while I was driving her to the day care center, out of the blue she made exactly the same comment that GG had died but wasn't dead. This time, I just agreed with her, feeling that it was my time to say no more and to wonder what my granddaughter was trying to get across to me.

Her dog, a big old yellow Labrador retriever named Cody, had died a few months before GG. When my granddaughter asked her parents where Cody was, they told her he had gone to heaven. As I pulled into the day care center parking lot, she suddenly remarked that she'd had a dream about Cody; he and GG were playing together in heaven, and GG was very happy.

That matter-of-fact report seemed to put the question of GG's condition to rest. A few weeks later, as my granddaughter and I were walking in an apple orchard on a local farm, we spotted a big yellow Lab far down at the end of a row of apple trees. She didn't hurry toward him or even call out to him. She just said, “Look, Cody's back. Now he's with the farmers.”

The number one emotional challenge in the entire human world is the stimulation of our vulnerability and the fear, anxiety and anger it provokes in us. The Schaubs demonstrate that it is the very universality of our vulnerability that offers us a new way to see it and be in harmony with it. Offering specific, intimate examples of the choices people make to deny their vulnerability, they show you how to practice the awareness of vulnerability and how to turn toward it with courage and serenity.

The End of Fear helps you to accept your vulnerability and to allow it to be your realistic spiritual path of connection to every other living being.

Bonney Schaub, MS, RN, and Richard Schaub, PhD, have trained hundreds of professionals internationally since 1980 in their Vulnerability Model. Originally applied to people in recovery from addictions, their five books have since expanded the model to help with relationship issues, young adult anxiety, trauma reduction, and spiritual development. They direct Clinical Meditation and Imagery (CMI) Training and Transpersonal Nurse Coach Training. They are parents and grandparents and live and work in Huntington, New York.