From Trappist Monk to Street Doctor 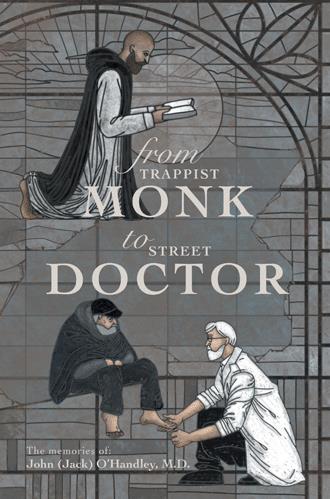 Jack English had his teeth knocked out by the boot of a Nazi soldier while in a German concentration camp during World War II. Yet, he spoke clearly and softly: The trauma did not prevent him from giving one of the most inspiring talks during my six years as a Trappist monk at the Abbey of Gethsemani in Nelson County, Kentucky.

On the day before his talk, English traveled from his home monastery, Our Lady of the Holy Spirit in Conyers, Georgia, to our abbey in the knob hill country of Nelson County, Kentucky.

Jack had made notes on a small scrap of paper during his journey. From those notes he spoke about the importance of small acts that impart great meaning and the importance of showing respect for others in our speech and our actions . . . especially those less likely to inspire our respect.

Dr. John (Jack) O’Handley looks back at growing up as a Navy brat who spent six years in a Trappist monastery before deciding to embark on a career as a doctor.

As the oldest son of a career naval officer and his wife, Marie, the author grew up in many parts of the world. His father was one of five children born to a former Catholic priest and his wife in Brooklyn.

While he grew up in a loving family, the author’s father never did understand his decision to drop out of college to enter monastic life.

In this memoir, he looks back at his life as a Trappist monk as well as what eventually led him to pursue a career in medicine—as well as how he fell in love with a nursing student named Hannah. The two eventually married and started a family.

Join the author as he offers fascinating glimpses into a life along the road less traveled, including his time as a monk, family physician, and tending to the homeless of Columbus, Ohio, for more than twenty-five years as a street doctor.

Dr. John (Jack) O’Handley entered the Trappist Monastery of Our Lady of Gethsemani in Kentucky at age eighteen, leaving to enter the medical profession. He spent fourteen years in private practice as a family physician before becoming a faculty member at the Bethesda Family Medicine residency program in Cincinnati. In 1995, he accepted the directorship of Mount Carmel’s Family Residency program in Columbus and began his work with the homeless as medical director of the Street Medicine program. He retired in 2021.