When We Push Through Sound 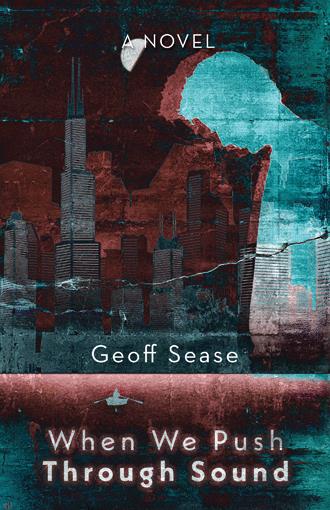 Shadows of my life flash and twirl about my head on snippets of scissor-cut paper scraps floating through the air—their memory-filled stories flirt with my grasping hand. Dull sounds of uninspired tunes clash in my ears, taunting me with cherished songs of yesteryear—their melodies unforgivably sterile and deflated, doing nothing other than filling the emptiness all around. The shadows clear away, and I find myself inside an elevator. It is mystical—otherworldly—and its long rise leads me to a rooftop that scrapes the sky. There is Sharon, my Sharon, waiting in a white dress and red scarf in the bright sunlight, her silhouette rising above the concrete and steel. She is so close but, like my memory-filled confetti, just beyond reach. Her face darkens like a singular cloud grays a clear day. She wants help and stretches out, calling to me but making no sound. I yell, “Stop! The roof edge behind you!” while her bare foot slides backward; then, with a whoosh, she’s gone. Her sudden drop seems to catch the red scarf by surprise, and it loses its grip around her neck, then falls away, fluttering under the breeze one last time. The sun beats down, and I sit alone on the vast, empty roof in the sky, left searching for my shadows. *** Tristan bolted awake with a desperate gasp for air, and in one frantic bone-creaking motion, pulled himself upright. The pupils of his blue eyes collapsed to pinpoints, and his lids fluttered. In the place where dreams and reality collide, where both claw for control, Sharon’s name still hung on his lips, and her image remained sharply etched in his vision. He found himself propped up at a right angle with the support of his arms. Sweat dripped from his face and soaked through his shirt and pillow. He fell back onto the bed with a thud when reality came to stay, and he resignedly understood his dream had lost the battle for possession of his mind. A dull ache and deep longing settled in, and he laid back flat against the damp bed sheets. There was both joy and dread in the world he just came from, and he wavered between the two. While he wished he could close his eyes to reunite with Sharon’s pretty smile, he struggled to understand her sadness and self-destruction in the dream. He wondered if her sad expression was only a reflection of his own unhappiness and growing despair. How often had he dreamed of Sharon? He had lost count. In so many ways, the recurrence had turned into a curse. Now he could only wait for the next time. After several minutes lying motionless, lost in the filament traces of where he came from, Tristan slowly pulled himself up from the bed. The room was still dead-of-night dark. He looked over to the clock and grunted at the 4:15 glowing green across its display. His thoughts still lingered on the intense image of Sharon, like the pulsing light sensation that lingers on the surface of an eye’s retina after staring at the sun. It had been three years, four months, and a couple of weeks since he had signed the divorce papers that had both set his college sweetheart free from the bonds that bound her to an unhappy workaholic and triggered the beginning of his downward descent. Even as they shared custody of their seventeen-year-old daughter, Sara, it was increasingly infrequent that he and Sharon spoke more than in passing. In the years together just after college graduation in the mid-eighties, they had started careers in Chicago, living in a tiny apartment bordering Hyde Park. It was affordable and, most importantly, didn’t require a large deposit. Those were the sweet, tender years of a budding new life together when the sun shone brighter, the days were longer, and the opportunities seemed endless. Both had great professional potential with top-tier investment firms in hot pursuit, but, like most fresh graduates, they were barely scraping by. None of that mattered to them, though. They clipped coupons on the weekend, carpooled to work, and never thought twice about it. During those early times, they would bundle Sara into her little one-piece snowsuit, with her blonde ringlets poking out from the edges of her Bears knitted cap, and her tiny fingers tucked into little mittens that her grandmother had made, to take her down to the neighborhood park. They would play with Sara there for hours, making snowmen or snow angels. Her carefree laugh would reverberate off the old grumpy building walls that surrounded them, mixing with their own laughter. Then, when she was ready to go home, they would hold hands and walk back together with her between them while the sun’s late afternoon rays tilted on the horizon. But those days were gone, packed away, cataloged into memory files that unearthed themselves less and less frequently. Tristan walked slowly to the bathroom and turned on the shower, then sleepily undressed. As he waited for the water to warm, he leaned into the bathroom mirror and looked at his face, staring at its barren detail for the first time in a very long while. In that early morning muddle, in the starkness cast by the bright bathroom light, he evaluated himself with the level of objectivity he would afford a stranger. His hair had increasingly grayed over the last few years, with more salt now than pepper, but thankfully it was all still there. The corners of his eyes had sprouted crow’s feet, but when they had appeared, he couldn’t recall; and to top the aging sundae off like a cherry, a liver spot of surprising proportion had grown on his cheek. He frowned at what he saw and climbed into the shower stall with a grumble, but not before grabbing the half-empty bottle of Pepto Bismal sitting by his toothbrush. The burning in his stomach was back.

On a cold day on a bridge above the Mississippi River, Tristan James is drugged out, liquored up, and about to give in to the irreversible as he teeters over the water. Not long ago, it would have been inconceivable for him to be standing there. His life had always been full of successes: a brilliant wife, a loving daughter, and a satisfying career. His story was destined to be triumphant with a happily-ever-after ending. Unfortunately, real tales rarely finish that way. First came the divorce, and then there were the series of disasters at work. Tristan had always relied on the sounds of his guitar to bring him solace when he faltered. But now, a constant and terrifying buzzing in his ears drowns out its joyful melodies, and he spirals to the edge. Jumping off the bridge would be a quiet relief. But Tristan has a bit of good fortune remaining at the bottom of his bucket of life’s blessings—five extraordinary women surround him. Each is magnificent in her own way, and together they refuse to let Tristan’s music die. Only one question remains: Can they reach him in time? In this novel, a lifelong winner must confront failure and stop the deafening noise in his head long enough to hear the healing voices of the women who love him.

Geoff Sease is a retired corporate executive who lives with Suzanne by a pretty lake in North Carolina. They have watched, with pride, their three boys grow into admirable young men. Geoff now fills his days with writing, business consulting, and getting a local rock band off the ground. This is his first novel.