The Ghost in the Hollows 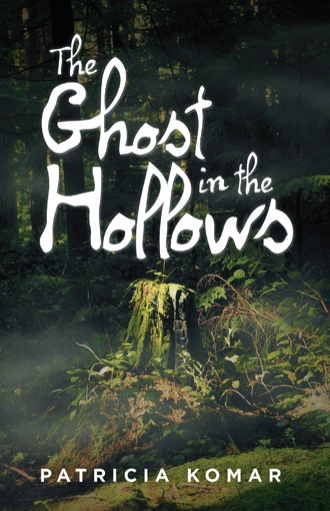 Faith Clancy took her first step through the large green front door of Hollow Hills Middle School. Without any warning she felt a bolt of lightning zapping through her body. A splash of neon rainbow colors blinded her. Seconds later it was gone. At that precise moment she knew. Yes, she knew this was not just another middle school. There was something mysterious and electrifying happening here.

Faith stood frozen like an ice statue, just inside the doorway. Her brown eyes looking left then right. Mrs. Clancy, Faith's mother, totally oblivious to what had just happened, turned right and continued through the next door. The beige door with the big turquoise letters that said "Office". Obviously Mrs. Clancy hadn’t felt a thing. Whatever had just happened was felt and seen by Faith and Faith alone. This was just the beginning. Faith shook it off, like a dog after being dive bombed by a predatory bird. She followed her mom through the beige door and into the office.

"Can I help you," squeaked a voice coming from out of nowhere. Faith looked around. She didn't see anyone. Then slowly, edging up, a face peered from behind the counter. The voice said again, "Can I help you?" A copper colored name plate sitting on the counter next to a vase of orange and yellow flowers announced to the world the voice belonged to Ms. Cooper, Secretary. "Hellooo, can I help you?" squeaked Ms. Cooper again as she stretched higher and higher trying to be seen.

Mrs. Clancy replied, "Oh, there you are. I’m here to register my daughter for school."

Ms. Cooper's head sunk below the counter. There was a tick, tick, tick of phone buttons. "Ms. Flemings, you have a new student." Her head popped up this time. "Please have a seat. The counselor, Ms. Flemings, will be with you momentarily."

Footsteps could be heard, "Click, Click, Click", as the counselor made her way to the front office. A young lady with long straight brown hair wearing a fuchsia colored lacy top over black slacks extended her right hand as she introduced herself, "Hello, I'm Miss Flemings and you are?"

"I'm Andrea Clancy" she said, shaking the counselor's hand, "and this is my daughter, Faith."

They walked along a long narrow hallway. Faith noticed how the counselor held herself upright. She pegged her for a dancer. Faith noticed things like that.

They came to a conference room with a big round table in the centre. Ms. Flemings invited them to sit down in the comfy burgundy chairs that encircled the table. Faith looked across the table and for the first time noticed the counselor`s eyes. They were a copper-greenish color with a softness to them. The counselor looked back at Faith and at that moment Faith saw something else. The counselor knew. It was as if she knew something more than most people and her eyes were telling Faith that she knew something about what Faith was going through.

Faith opened her mouth to reply but her mother spoke first. "We’ve just moved from Greenvale after a family divorce and Faith, my daughter is very excited to begin at her new school."

Miss Flemings looked at Faith with that knowing look she probably gave to all newly separated divorced families and said, "Well, it's good to have you here, and if there`s anything I can do to support you, let me know. Right now we can get started by completing the registration forms and then you`ll be given a tour from two of our student guides."

The counselor stepped out of the room and disappeared around the corner. Faith could hear her placing a phone call. After a few minutes Faith heard voices coming from the long hallway that led back to the office. Two students appeared.

Miss Flemings introduced the boy and girl, "Faith, this is Robert and Lana, two of our peer helpers who are here to give you a tour. Why don`t you begin now while your mother completes the registration forms."

Faith joined the two peer helpers. While the helpers talked, Faith noticed many things about the school like the smell of chocolate coming from the Foods Room where the students were making chocolate cake. Just outside the door leading to technology shop they heard loud shrill noises from drills and saws. It smelled like fresh cut pine trees. The tour rounded a corner and she heard the sound of guitar strumming.

The helpers led Faith down a long hallway. The scent of French fries wafted past their noses and grew stronger as they neared the cafeteria. They entered and watched the cook dunking a metal strainer of fries into a vat of seriously hot oil. Out of the corner of her eye, Faith was distracted by someone coming through the door. She turned around to see. No one was there. That's strange, she thought.

The tour continued through the courtyard doors to the athletic fields behind the school. There was a soccer field, football field and baseball field. They walked to the bleachers walked up to the top, sat down. The two helpers talked about the clubs and sports the school had to offer.

Robert asked, "Faith, are you interested in joining any clubs such as the school newspaper club, cross country running, chess club, home arts or computer club?

"Well, I’m not too sure." answered Faith, trying to be polite as she continued, "They sound okay but I thought I might start with getting used to my new home and living out in the country. I came from a city school where it wasn't quite this green. It was busy, lots of traffic and the air definitely didn’t smell like this. It smells so fresh here. I’m used to the smell of car exhaust and pollution. She caught the smell of something, " What’s that smell? It smells like something's burning but a nice smell."

Lana answered, "Someone must have their fireplace going. That's the smell of burning cedar."

Robert intent on sticking to his topic said, "Faith what about sports? We have volleyball, basketball and track and field."

Faith replied, "Maybe later in the year." She was distracted by a figure to the far left of the football field standing next to a tree.

"Over there by that big maple tree. "What’s that?" Faith asked.

As they walked, Lana said, "Oh, I forgot to tell you about cheerleading tryouts. Interested?"

Faith immediately thought about cheerleading tryouts at her former school where a group of girls started bullying her. She dropped out, not even making it to the tryouts. Later, when talking to the school counselor, she found they had targeted her to get her to cave. She was definitely better and the bullies wanted to win at all costs. Not a good time for Faith.

Lana repeated, "Faith, I said, are you interested in trying out for cheerleader?"

Faith immediately looked up and answered, "I don’t think so."

They cut diagonally across the football field and walked a few meters until they came to a large maple tree towering over a bubbling brook. Huge rocks sat on either side. Faith looked around for the figure she'd seen. Gone. That's twice, she thought. She looked down at the creek and watched as a fallen leaf floated on top of the crystal clear water.

Robert looked at his watch and said, "We’d better head back. Almost lunchtime. Oh, I forgot one thing. See that line of trees over there? It marks the beginning of the forest and it’s also the boundary of the school. No one's allowed in that forest during school hours. Serious trouble if you do go beyond the tree line." 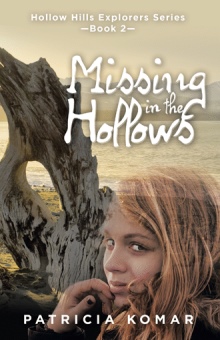 Missing in the Hollows
Patricia Komar
$14.99

Faith, whose parents have just divorced, is happy to be rid of the bullies that tormented her at her former school and begin a new chapter in her life. As she eases herself into a routine, Faith is soon recruited into the Hollow Hills Explorers club by her new friends, Dalton, Finn, and Oliver, who tell her their mission is to explore the unknown. One night while on a scientific adventure to observe the blue moon, the explorers unexpectedly encounter an apparition that apparently only Faith has the ability to see. As the group investigates the apparition’s origins, Faith realizes the ghost has taken up residence in her school and dislikes bullies more than she does.

In this young adult mystery, a teenage girl who relies on help from her new adventurous friends and a ghost to take on bullies soon discovers the true meaning of trust, friendship, and believing in herself.

Patricia Komar earned degrees in Switzerland, New York, and British Columbia where she studied the arts, psychology, and writing. She has written feature articles on canine sports for North American publications. Patricia lives on the Pacific Northwest coast with her husband and two dogs where she spends her time exploring forests, kayaking, swimming, and dancing.