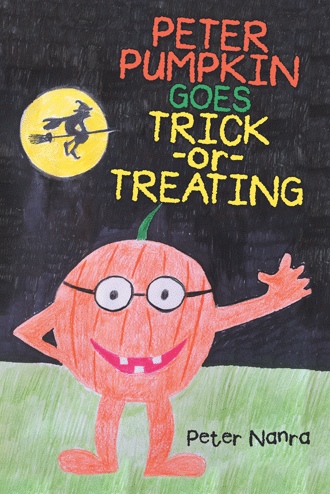 Peter is about my height, which is 2 feet 1 inch. We don’t grow any taller after we turn six years old. He is a little heavier, but not by very much. Not really noticeable. He wears glasses. He is the only pumpkin that I have ever heard of wearing glasses at such a young age. He kept misplacing things, and could never locate anything, yet sometimes it was right in front of his face. So Dr. Pumpkin made him take an eye exam, and he failed it last year, and so he prescribed glasses. He has to wear them everywhere he goes but you can tell that he doesn’t like to wear them. His skin color is a dull orange, but still a very strong and dark orange.
His skin is very hard. He has no marks or wounds on his skin, despite having serious walking issues. I don’t mean to say he is limp or anything. It’s just that he stumbles a lot, especially when he tries to walk fast. He has fallen down so many times right on his face, the ground beneath his feet braces for a thud when he comes its way. His mind is hard and thick also, in the sense that nothing seems to faze him. As I’ve said before, he is a loner. He gets picked on a lot, by all sorts of creatures. Pumpkins, people, and ghouls alike. They make jokes at him. Like ‘Peter, Peter pumpkin eater, had a wife and couldn’t keep her’. That one doesn’t even make sense, as Peter is only four years old…he’s not even married, let alone separated or divorced from a wife.
‘Peter, Peter pumpkin eater, got out of bed but always a dreamer’. Well that one is probably true.
‘Peter, Peter pumpkin eater, wrote a test but always a cheater’. Well I don’t think he cheated on his Trick or Treat test, and he doesn’t go to school full time until next year.
‘Peter, Peter pumpkin eater, tried to run, never passed a meter’. I heard that one when he was playing soccer the other day. He certainly does not run very fast, and is not very athletic.
‘Peter, Peter pumpkin eater, kept a secret by being a squealer’. That one is lame.
‘Peter, Peter pumpkin eater, found a rat then tried to feed her’. I heard that one just last week, and that was directed at me. I don’t eat rat, and I don’t think he would feed me rat to begin with.
As many of those Peter Pumpkin jokes I have heard, I bet he has heard ten times more than me. And the whole premise of the joke doesn’t even make sense. I mean Peter does not eat pumpkin. We don’t eat rat, and we don’t eat pumpkin. That is gross. That’s like cannibalism. No pumpkin eats pumpkin! 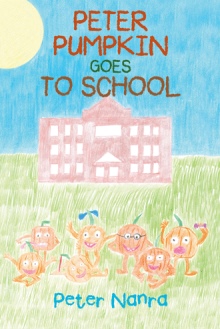 Halloween is a special and exciting time for pumpkins. They play games, light fireworks, and eat lots of candy.

But nothing beats trick-or-treating, and Peter Pumpkin is finally getting his chance to leave the pumpkin patch and join the other pumpkins for the festivities.

He gets a surprise when his sister, Petrina, tells him that instead of trick-or-treating with the communal group, he’ll be joining her and her friends on the adventure of a lifetime.

First, they must get prepared, and a primary order of business is deciding what they’ll wear on their journey. They also need to be safe, because if they meet a witch, ghost or ghoul, they could be turned into pumpkin pies or worse.

The pumpkins also know that Wanda--the evil ghoul--might invade the pumpkin patch if she figures out where the pumpkins keep their candy. In fact, if she had her way, she’d exterminate all the pumpkins.

Join the pumpkins as they enjoy a rite of passage and navigate an exciting but dangerous Halloween tradition that dates back hundreds and hundreds of years.

Peter Nanra was born in Leicester, England, and lives in Vancouver, Canada. He earned a bachelor’s degree from the University of British Columbia, and he views reading as a key element in the education and development of children.