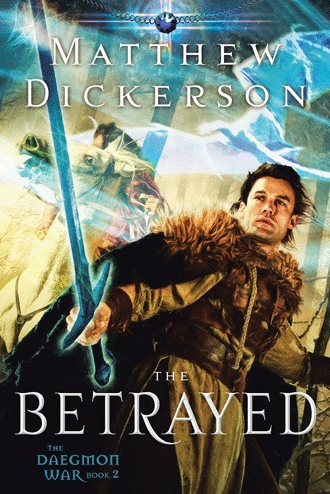 Elynna’s eyes were drawn there. Upon that dais, seated in a large stone throne, sat the one Elynna assumed was the Gaergaen. He was a tall man—taller than any of the Undeani but with the same facial features. He wore a dark-red robe inset with jewels, and a heavy crown sat upon his head. His right hand rested on the arm of his throne, but in his left he held a wooden staff.

Elynna knew at once what it was and why she had felt such a strong sense of the Daegmon’s presence.

“Look out,” she warned. “He is one of them.” Her voice echoed in the stone building.

Cane looked at her oddly. “One of whom?”

Before Elynna could answer, the man raised his hand. Elynna was struck with a searing heat. She stumbled back a step, and several seconds passed before she could answer. “One of the Daegmon. Like Koranth.”

“Welcome,” the Gaergaen said. His voice boomed through the hall like the voices of several people speaking at once. “We have been waiting. You saved us much work pursuing you across Gondisle.”

Elynna looked around in fear and confusion. She could feel the burning Daegmon power emanating from the throne. Had she not, with her own eyes, seen a human form seated there, she would have thought it was the Daegmon. “Just like Koranth,” she repeated. Her voice cracked as she spoke, but she forced out the words loud enough that all her companions could hear. “He is the enemy. This is the trap.”

This time the others understood. Several backed up and raised their swords in defensive postures. Nahoon shouted at Namha in his tongue. Tienna dropped to a crouch. Others raised their bows and aimed arrows toward the figure on the throne.

“So you have guessed,” said the Gaergaen. “Yes, the one you know as Koranth is my brother. A weaker brother, I might add. Had he done as well as I, you would all be dead.”

She fought the panic. Clung to the strength flowing from Cane’s gift. This is what they had come for—to defeat this enemy that would destroy all of Gondisle if they did not stop it. Still, she could not help but back up again. She stood now three or four steps behind Cane. Several others backed up with her. But Cane stood rooted where he was, facing this new enemy.

Only then did Elynna realize that a wall of Undeani warriors had closed in behind them. She could not have fled if she had wanted to. Their line of spears stretched from the northern spur of the mountain to the southern, blocking her companions’ retreat.

She was not the only one to notice. “We’re betrayed,” Hruach shouted.

“What do we do?” Aram asked in a low voice. “It should be easy enough to break through the line of warriors, but where would we escape to?”

“Escape?” Cane laughed. “It is not we who need to escape. What is there to fear? We came to destroy, not to be destroyed.” He reached down into his shirt and withdrew the stone. It now glowed in his hand. An instant later, he drew his sword and lifted it high over his head. The blade burst into bright blue flames. He laughed again, more loudly and wildly. “Yes. It is we who will destroy, and we will begin right here with the Gaergaen and the traitorous Undeani.”

The Undeani warriors backed up. As the flame on Cane’s blade grew larger and brighter, several of them bolted for safety, and their line broke. Even the Gaergaen looked surprised. Elynna could sense his power falter.

But the scene had not yet played itself out. There was another power also—another familiar presence nearby searing Elynna’s mind and clouding her thoughts. As Cane stepped toward the throne with his flaming sword, the Gaergaen rose to his feet. He picked up his staff and banged it into the dais. The ground shook beneath their feet, and the great stone hall boomed with a terrifying explosion. Elynna stumbled and covered her ears. Cane halted as the ground beneath him rocked.

A second time the Gaergaen slammed the floor with his staff, and again the earth shook. Cane stumbled. The confidence slipped from his face, but he regained his balance and continued on. Three steps. Four. Five. The blue flames engulfed his whole arm now. With each step the flames intensified. Cane was rife with power. Soon the flames rose twice his height. Yet he was still fifty feet from the throne—too far away to strike a blow. A third time the Gaergaen’s staff came down. Red light flashed like a lightning bolt from the top of the staff. The flames about Cane dimmed as a bolt of red light beat against the blue.

Then came the shouts from behind. Elynna turned in time to see the Undeani warriors fleeing. The wall of spears that had prevented their escape crumbled away. The momentary relief that they would not have to fight a human enemy did not last long, though. Too late Elynna recognized the other presence she had sensed. Though she could not see it, she knew by the power of her gift.

An instant after she identified it, the creature’s screech filled the air, echoing off the mountain walls around the village. “Look out,” Elynna cried. “The Daegmon is upon us.”

The company burst into motion. Bandor and Anchara had already drawn their bows. Two shafts flew together toward the throne. The Gaergaen laughed. Red flames leapt from his staff and engulfed the arrows before they reached him.

On the other side, the massive winged shape of the Daegmon dropped down into the village, filling the gap vacated by the retreating Undeani and again blocking the companions’ escape. Elynna had seen the creature many times. She had watched it destroy her village. She had faced it three times in battle with her companions. But the sight of it still filled her with terror and awe. Great gaping jaws, each tooth like a man’s sword. A body as long and massive as a row of five horses. A tail like a battering ram. Talons that could rip a man in half. The shadow of its wings could engulf the whole company. 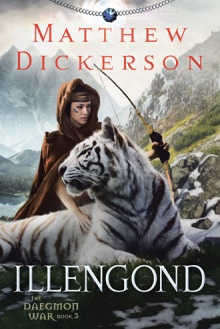 The centuries-old war against the Daegmon Lord has been dormant for generations. Knowledge of the Gifts—mystical powers of healing and shaping and knowledge, of speech with creatures, and of supernatural strength in battle—has faded into dim folklore, along with knowledge of the ancient enemy. When a Daegmon suddenly appears out of the old tales, and begins to wreak destruction on the remote villages of Gondisle, the realm is thrown into turmoil. Heroes of the land, led by a new generation of the Gifted, must arise and face this ancient enemy. But their situation grows more dire when the king not only refuses to give them aid, but proves to be under the influence of the Daegmon Lord’s servants.

In Book 2, Elynna and her companions continue pursuing the Daegmon in a desperate attempt to rescue the realm of Gondisle. The discovery of an old talisman offers a promise of power, and with it a new source of hope, but it also causes dissension within the company. Thimeon abandons the quest, choosing to return alone to the archives of Citadel in hopes of discovering some new knowledge that will aid them in the battle. While Elynna, now bereft of her Andani guide and hunter, must find a way to escape the armies of Citadel without giving up pursuit of the Daegmon. A wild chase leads Elynna and her company across the Plains and into the Undeani highlands where they find new allies, but also encounter new foes and betrayals, and discover that the Daegmon Lord is more powerful than they had ever imagined.

In this work of epic fantasy, the second of three volumes, a group of Gifted heroes finds their quest disrupted by a talisman that brings both power and dissent.

Matthew T. Dickerson teaches at Middlebury College. In addition to his three-volume fantasy novel, The Daegmon War, he is also the author of two works of medieval heroic historic fiction (The Finnsburg Encounter and The Rood and the Torc) and the author or coauthor of numerous books about fantasy and mythopoeic literature. He currently lives in Vermont.