Creation of the Southern Nation

The Memoirs of General-in-Chief Thomas Jenkins Worth, CSA 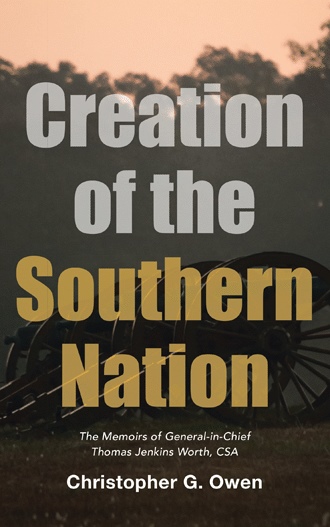 The Civil War was a massive outpouring and display of civic duty, one almost impossible to conceive of happening today. The armies on both sides fought with a zeal and ferocity rarely seen in history.

Civic duty may take many forms, but the most militarily important form is patriotism. Patriotism is the love of one's country to the point where a person is willing to lay down their life for the survival of the country.

That kind of patriotism we see in abundance in The Civil War....The political climate in the late 1850's continued to deteriorate at an ever accelerating rate. Propaganda from the abolitionist activists continued to a high fever pitch in an ever inflammatory tone. There was no compromise with such a din of extremism—no solution other than war and the pouring out onto the ground rivers of soldier's blood. The only thing a Southerner could say complimentary to Harriet Beecher Stowe's work was that at least she depicted Simon Legree as a Northerner. Such inflammatory literature and political rhetoric coupled with the greater need for slave labor to feed the cotton gins and resulting abuses of the slaves created a highly explosive political atmosphere....“Mr. President, how did this come about? Did you write this document?” “No, I did all the legal wording to it but the idea of it came to me through a mutual friend of my wife and I, little Nettie.” “Little Nettie?” I asked. “Yes, Nettie Coburn. She is a Spiritualist medium that comes here to do seances. You see General, I have become a Spiritualist. I would appreciate it if you could please keep this to yourself. Are you familiar with the religion of Spiritualism?”

It is 1862 when Thomas Jenkins Worth, son of a brilliant commander, is summoned to the Confederate capital to receive a promotion to major general from President Davis. It is the eve of a major clash with invading Union forces, and although Worth opposes the ills of both sides, he is now fighting for the South, which is one victory away from changing the course of history forever.

A visionary leader, Worth is determined to show all the Southern gentlemen dreamers how the war needs to be won. Just as he assumes command in the Trans-Mississippi, he receives news of the disasters at Forts Henry and Donaldson at the hands of General Ulysses S. Grant. Now with the Confederate window for potential victory narrowed and the entire effort of the war in doubt, Worth must help to end the conflict. Instead of embracing bloodshed, he focuses on ending the losses of the war and ultimately creating a new Southern nation of freedom, peace, and plenty for all countrymen—putting into place a legacy that still lives on to this day.

Creation of the Southern Nation shares a tale of perseverance, hope, and bravery as a Confederate general sets out on an exceptional quest to build a new nation during the Civil War.

Christopher G. Owen earned a bachelor’s degree in history. He served as a Sergeant in the 187th Infantry Brigade United States Army Reserves. Christopher currently resides in Standish, Maine. Creation of the Southern Nation is his debut novel.