And Other Travel Tales from an Epic Journey around India

Once, long ago, Bombay had been a group of quiet and isolated islands. Then the shallow sea between the islands got filled in, the land was reclaimed, and people arrived in their tens of millions to create a vast, teeming, seething city; a bona-fide Indian metropolis complete with freeways, a Manhattan-style skyline, traffic-choked streets, and a constant pedestrian crush.

By the time of our visit the modern city of Bombay had grown to occupy the entirety of a contiguous, densely populated peninsula, about twenty miles north to south. The eastern side of that peninsula faced onto the calm waters of Bombay Harbour, with the western side facing out onto the Indian Ocean. Most of the city’s hotels, restaurants, commercial facilities, and tourist attractions were concentrated in Colaba, at the southernmost tip of the peninsula. So from the ferry port we hopped into a cab, to make our way there.

Approaching Colaba, the land curved to form a large protected cove—“Bom Bay”, or the Good Bay as it was originally labeled by the Portuguese. It was late afternoon, the sun was shining, and the drive along the bayfront was scenic, offering glorious views of the water and the impressive Bombay skyline beyond.

Until, that was, we got to Marine Drive, an eight-lane road that followed the curve of the lower part of the bay, linking the city’s posh northern neighborhoods to Colaba. Because as our taxi driver swung the car onto the broad sweep of Marine Drive, something in his brain seemed to snap. Without reason or warning he put his foot down, and in an instant he morphed from being a meek taxi driver into a Formula 1 daredevil, engaged in vehicular warfare with several thousand other enraged Bombay motorists.

It was terrifying. We found ourselves hurtling down the Marine Drive speedway at 90 miles an hour, all the while weaving madly through a lightning-fast stream of buses and cars. Often only a few inches separated us from the next vehicle. The moves were reckless, the swerving traffic nerve-racking, and the speed truly frightening. Camilla was gripping my wrist so tightly I thought she might snap it right off. For my part, I was praying.

The taxi driver, however, seemed completely impervious to our discomfort. He talked constantly, pointed out landmarks along the way (disturbingly taking one or both hands off the wheel to do so), yelled at other motorists, and laughed maniacally each time we almost died. Without question, it was the wildest, scariest, most terrifying car ride we took anywhere in India.

Miraculously, we arrived at our Colaba hotel in one piece. As soon as I opened the door of the cab, I doubled over and threw up into the gutter.

Unsurprisingly, we chose to avoid taxis for the remainder of our stay in Bombay.

A wide pedestrian promenade ran the length of Marine Drive. We hadn’t noticed it on our high-speed taxi ride into Colaba—we’d been too busy preparing for our imminent demise. But later, once I’d regained my composure, I read in the guidebook that walking the length of the promenade was a favorite Bombay activity, especially at sundown. So as the sun began to drop, we headed out to do just that.

In the soft light of the early evening Bombay’s skyline was surprisingly attractive, almost romantic. Perhaps that explained why there seemed to be an inordinate numbers of young lovers moseying back and forth, holding hands, cuddling on benches, and even kissing. (Public displays of affection were not something we had seen often in conservative India, so they seemed all the more noticeable in Bombay.)

The youngsters mingled in with families on outings, groups of raucous children trying to escape the attention of their nannies, track-suit-and-Reebok-clad joggers, and elderly ladies with yappy dogs on leads. Added to this was the usual throng of coconut sellers, juice-wallahs, beggars, and teenage boys selling cigarettes, batteries, newspapers, and furry dolls.

It was as if we had fallen into a slow-flowing river of humanity, a wonderful showcase of Bombay life that gently carried us along with it, all the way up the promenade.

Toward the northern end of Marine Drive we came to Chowpatty Beach, a patch of dirty sand that seemed a bit of a misnomer given that if anyone had attempted to swim in its polluted water they would almost certainly have died of a lung infection. Nonetheless, it was Bombay’s most famous seaside venue, where the festive atmosphere of the Marine Drive promenade seemed to crystallize into physical form, taking on the shape of a colorful, noisy carnival.

There were pony rides, a decrepit-looking Ferris wheel and a merry-go-round. There were also astrologers and masseuses and knickknack sellers, and old men who made a living from cleaning out people’s earwax. I paid a fellow in an elaborate turban a few rupees, and in return he trimmed my nasal hairs.

We walked through the sideshow alley where I had a turn at the shooting gallery, only to become embroiled in a good-natured dispute with the owner about the number of bullets I was entitled to fire per rupee.

Afterward, at a rickety plastic table, our chairs sinking into the sand, we ordered Bel Phuri, a uniquely Bombay treat that had the texture and taste of salty-sweet muesli. It was served to us in a cone of newspaper, to be eaten with fluorescent-colored disposable spoons.

Everything was charming and quaint, reminiscent of the cutesy American county fair so often depicted in film. Except instead of wholesome Midwesterners eating apple pie and saying things like “Yes, ma’am,” in Bombay it was men in lungis and sari-clad matrons, eating Bel Phuri and talking in Hindi. 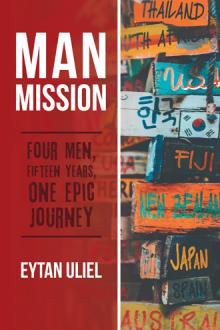 For centuries, India’s mystical allure has drawn in visitors in search of enlightenment, riches, romance, and adventure. In the mid-1990s, as a precocious twenty-three-year-old, author Eytan Uliel and his girlfriend set off on a journey of discovery, leaving behind the comforts of Sydney to backpack in India for four months.

Limited to a budget of twelve dollars a day, they lived, ate and traveled like locals. The journey around the sub-continent took them north to south, east to west: from the holy city of Varanasi to the modern-day playground of Mumbai; from the desert fortresses of Rajasthan to the bucolic backwaters of Kerala. Along the way they sipped tea in Darjeeling, experienced a train ride from hell to Madras, got bit parts in a Bollywood film, ogled at the incomparable Taj Mahal, hung with hippies in Goa, and met a whole lifetimes’ worth of fascinating, entertaining and memorable characters.

Head Waggling in Delhi offers timeless insight into life on the road in India—the good, the bad and the downright bizarre—filled with wry observation, affection, and humor.

Eytan Uliel is a wanderer, global traveler and seriously committed gourmand. After graduating from the University of New South Wales, Sydney Australia, he practiced corporate law for several years before moving on to a career in investment banking, private equity, and oil and gas finance. His work schedule has taken him to every corner of the globe, and he chronicles these journeys on his blog, The Road Warrior (www.eytanuliel.com). Born in Jerusalem, Eytan currently divides his time between Los Angeles, Nassau and Sydney.