The Weird Animal Club at Halloween

It’s OK to Be Different 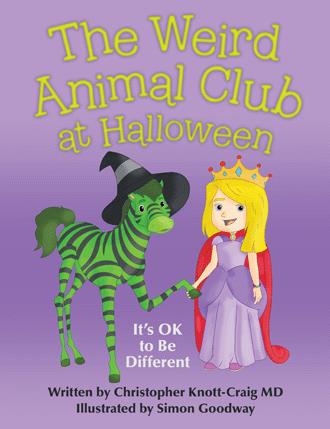 There was a group of animals who were all a little different from other animals. As a result, they felt left out and lonely. It was difficult for them to make friends with other animals. Over time they formed a group of friends with other animals who were also different – this was The Weird Animal Club. They were best friends, played together and had lots of fun.  They also had a special human friend, Cate, who was 6 years old and showed them new games to play and even went to school with them. Cate was also different – she could only walk on her toes, and not on her flat feet. And her friends also made fun of her. 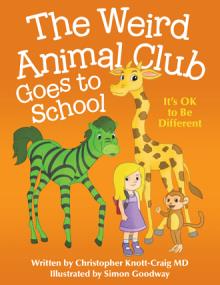 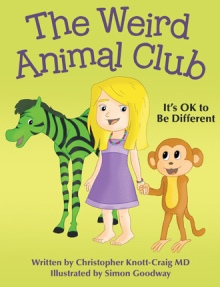 Alex the monkey has only one arm. Rebecca the rabbit has floppy ears that don’t stand up straight. Zoe the zebra has green and black stripes. These are just some of the animals who are members of the Weird Animal Club. They’re all just a little different from the others, but they’ve become best friends. They play together and have lots of fun with their human friend, Cate, a girl who walks on her toes.

It’s Halloween, and the Weird Animal Club is ready to go trick-or-treating. But Cate notices the lonely new neighbors who moved in across the street. Haley the Hippo has a red tongue that doesn’t fit into her mouth, and Jenna the giraffe has a long but crooked neck. The Weird Animal Club invites Haley and Jenna to join in the fun.

A sequel, The Weird Animal Club at Halloween shares a story of love and acceptance and shows children that being different means they are special, and special is good.

Christopher Knott-Craig, MD, is an internationally recognized pediatric cardiac surgeon who has done thousands of surgeries on babies and children from around the world. He is the author of of Lend Me a Kiss, The Weird Animal Club, and Bedtime Dinosaur Stories for Kids. Visit him online at www.chrisknottcraig.com.