As the Sun Rises, Darkness Falls … or Does It?

Book 2 of the Katiann Series 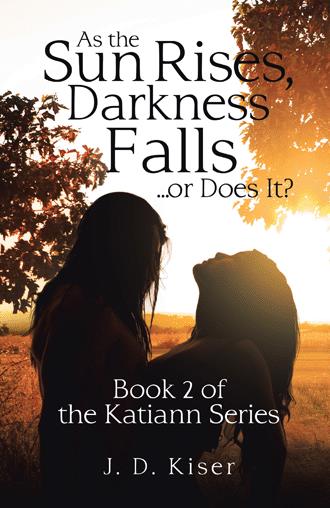 Darkness was everywhere. Katiann could not see what was coming; all the hair on her arms stood straight up, telling her it was something dangerous. In every direction she looked, there was a dark mist, and it appeared to be coming closer toward her. The mist was thick and smelled of rot. "Run!" she shouted. "Run! Get up, run as fast as you can, and do not look back."

Katiann tried to run herself, but the mist was too thick. The mist had encircled her, and there was nowhere to run. Whatever it was, it was holding her back to the point that she could barely move.

Screams came from every direction, but she could not get to them. All was quiet when the screaming stopped, and then the mist was gone. Katiann looked around in disbelief. All the people were lying on the ground missing their eyes, tongues, and had a hole in their hearts. Blood covered the ground; she looked everywhere but found not a soul alive.

"Mat!" she yelled. "Where are you?" Katiann ran to her hut only to find a puddle of blood in the doorway. On the ground, she found Mat’s unity necklace, but not his body. She looked up to the sky when she spotted a bright light hovering just above the tree line. It shocked her as she watched the light fly off with more speed than a supersonic jet. She cried when she looked toward the sky. "Why! Why do you punish me this way? I have done all you asked of me, and now you take their lives away and my love."

"Katiann! Katiann!" yelled a man's voice. "Wake up, only a dream. Wake up!" When she opened her eyes, she reached to hug Mat around his neck. Katiann was shaking all over, and sweat was dripping from her forehead. Mat looked into her eyes. "What is it?"

Knock, knock, knock. "Come in; what can I do for you?" Mr. Peterson said as he stood up from behind his desk, putting his cigar down to shake the man’s hand.

"Good morning. I am Detective Martin," pulling out his credentials to show Mr. Peterson. The detective was dressed in black, wore a black cowboy hat with a silver medallion and leather cowboy boots with silver tips. He had not shaved in a few days with salt-and-pepper scruffy facial hair. The detective quickly scanned the room, noticing the cigar in the ashtray and the mess on the desk.

Mr. Martin spotted a beautiful collection of legal books in a mahogany case behind the desk. Over toward the right of the room were matching display cabinets filled with ancient Native American artifacts. With his deep voice, Detective Martin said, "So you are a collector. How did you come across such lovely pieces? They look old."

Still standing, Mr. Peterson walked over to the display and said. "Yes, they are ancient and priceless. You did not come here to ramble about my Native American artifacts. How can I be of assistance to you? Would you like a seat?"

Detective Martin walked over to Mr. Peterson's desk, saying, "I understand that Anna May is a client of yours. It appears that she has been missing for quite some time, and people are becoming worried. Since Miss May has made no effort to communicate with May Enterprises, I was hired to locate her."

Mr. Peterson tilted his head as he walked behind his desk and said with caution. "You of all people know that I cannot tell you anything about my client. I do not discuss my clients with anyone without their consent."

Mr. Peterson took a puff off his cigar, blowing the sweet scent to the side, placed his hands flat on his desk, and looked directly into the detective's eyes as he prepared to sit in his leather office chair. "Please sit, Detective Martin, why the concern is Miss May in some trouble?"

Detective Martin strolled over to the front of the desk and sat down, propping his boots on the corner of Mr. Peterson's desk as he leaned back with confidence. He pulled out a notepad, flipped it open to take notes. "No, I would like to ask you some questions about her disappearance. Can you tell me the last time you spoke to or saw Miss May?"

Mr. Peterson reached over to the corner of his desk and pushed Detective Martin's boots off the desk. "Miss May is a client of mine, and I've known her all her life. I am the family's attorney and handle all of her accounts, but I haven't any contact with her in nearly a year. Miss May is a very resourceful young lady. She is to check back with me after one year. Until that day arrives, I have no concerns, and neither should the others. Everyone was notified of her vacation and understood the terms of her agreement not to be disturbed.

The detective slammed both palms down on the desk as he got into Mr. Peterson’s face and said. "Something does not seem right to me, and I am not giving up until I have some real proof that she is indeed fine."

Mr. Peterson did not take kindly to the detective’s manner and believed he had threatened him; he stood up and said in a firm voice. "Detective Martin, if you will leave me your card, I promise, you will be the first one I contact. Now if you do not mind, our time here is over, you may close the door as you leave."

Detective Martin turned to leave the room; he tilted his hat and closed the door as he exited the building. Once outside, he looked around to see if anyone was watching, then took out his credentials and threw them into the trash as he left the building. 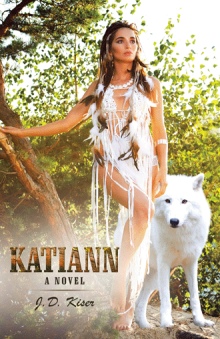 It has been nearly two years since fate led Katiann to a Native American village, and eventually into the arms of her true love and future tribal leader, Mat, and the family she had always wanted. Unfortunately, their happiness is short-lived when they realize there is more to their pasts than they originally believed.

The Grand Spirit (Tika) has entered the final stages of fulfilling the prophecy of the spirit world, leaving the tribespeople unprotected. While Katiann works to keep Tika safe until his transformation is complete, Mat struggles to protect the tribe from the destructive Dark Spirit who has come to convince the Grand Spirit to join his side. But what Katiann does not know is that her friends, who have not heard from her since she left home to temporarily live in the Native American village, have launched a determined search for her. As the Dark Spirit terrorizes her people, Katiann, who does not want to be found, faces an agonizing decision. Should she abandon her tribe to save the people she has grown to love or fight for the right to stay?

In this suspenseful tale, a white woman and her Native American husband must face the challenges between good and evil as the Dark Spirit arrives in their village to unleash destruction.

J. D. Kiser has two children and six grandchildren that live within walking distance. After spending her life caring for others, she is now focused on caring for herself. Kiser lives with her husband and dog on a small cattle farm in North Carolina. She is the author of the award-winning novel, Katiann. This is the second book in a series.