The Fetal Right to Life Argument 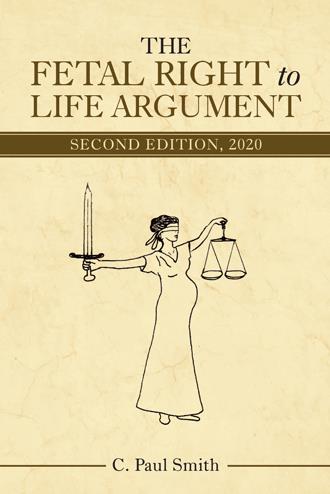 
The Court could easily have found that the fetal right to life exists under the Fifth, Ninth, Tenth and Fourteenth Amendments. But the Court said that in the absence of such a right being explicitly written in the Constitution, such a right cannot exist. It is interesting to note, though, that the pregnant woman’s privacy right to have an abortion is not explicitly listed in the Constitution. . . . The Court in Roe has adopted an obvious double standard by relying on the Fifth, Ninth and Fourteenth Amendments to find the woman’s privacy right, but refusing to apply the same principles to recognize the fetal right to life.

In the 1850s and 1860s, when most of the criminal anti-abortion statutes were passed, there was no need to decide the theological question of when the spirit “quickens” to body. It was felt that the right to preserve fetal life existed regardless of when this happens. In Roe, however, the Court used this uncertainty to dodge the fetal right to life issue. The Court apparently felt that by labeling fetal rights as a religious question that it could avoid the question altogether.

The dilemma of what to do with fetuses who survive abortions was recently in the national spotlight in January of 2019 when Governor Ralph Northam of Virginia was recorded stating that a proposed Virginia law would provide that if a fetus was alive after an abortion that the “infant” would be “kept comfortable” until “a decision would ensue between the physician and the mother.” (Governor Northam actually referred to the surviving fetus as an “infant” three times.) The chilling, unspoken message was that they would decide whether to kill the surviving “infant.” Such a discussion is horrific and barbaric. The premise of Gov. Northam’s statement is a false one—that the right to abort a fetus equals the right to kill a fetus. But for all the flaws in the Roe v. Wade decision, the Court did not actually say that. A right to abort does not necessarily mean a right to kill. Thus, under Roe v. Wade—without overturning or even modifying Roe v. Wade—States have the right to provide for the protection of fetal life at the same time they accommodate whatever right to abortion a woman may have.

As terrible as was Roe v. Wade in 1973, it did allow states to prohibit late-term abortions, including partial-birth abortions. Partial-birth abortion literally kills a viable fetus by crushing its skull and sucking its brains out. In 2003, Congress did pass the “Partial Birth Abortion Ban Act,” which prohibits such abortions, except if necessary to save the life of the mother. (The Supreme Court upheld this law in Gonzalez v. Carhart, 550 U.S. 124 (2007).


The divorce worked out smoothly, except for deciding what was to become of the frozen seven. Mrs. Davis wanted custody of the embryos because she still wanted to have a baby, and being implanted with one of the seven embryos seemed to be her best chance to do so. But Mr. Davis did not want the responsibility of having to support any of the seven embryos if they should later become born children, subsequent to the divorce. Mrs. Davis said that she did not want any financial help from Mr. Davis if such a child were born. But legally, Mrs. Davis cannot make a binding agreement that could be detrimental to her child. So the issue went to court.

If someone even mentions the thought of reversing or modifying Roe v. Wade, the pro-abortion crowd goes into hysteria where they cannot see straight—and they rail emotionally against anyone who dares criticize Roe. During the last 47 years, by invoking this hysteria the abortion-lovers have been extremely successful in causing many pro-lifers to back-off, hide, shut up and avoid conflict and controversy. I expect the Bogeyman phenomenon to continue to be employed by the pro-choicers as long as it continues to work.

Roe v. Wade (1973) is probably the most important Supreme Court case in the last fifty years. It has affected how the Constitution is interpreted, driven changes in laws, and continues to be a lightning rod in political debate.

Roe v. Wade is a complex case that established a woman’s right to privacy and a right to control her own body, which was good. But the Supreme Court also held that a fetus has no right to life and is not a “person” under the Constitution. That latter finding was a colossal error, an abuse of power, and an act of social activism.

We should never forget that Roe was a moral travesty that established a reprehensible and barbaric practice of killing defenseless human beings. We should acknowledge the flawed legal rationale used by the Court, and correct the problem. The good parts of Roe do not have to come at the expense of the fetal right to life.

C. Paul Smith has had a general law practice in Maryland for over 40 years. He has also been an elected official in Frederick County, Maryland. He is also the author of The State of the Constitution – 2017; The Capitalism Argument (2019); I Will Send My Messenger (1988, 2019), and The Prophet Joseph Smith – Restoration Issues (2019). See his website: www.cpaulsmith.com.