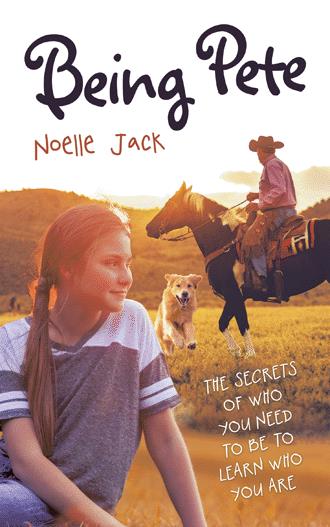 Natalie slowed her steps just enough to read the ad again and saw something she’d missed the first time, the last line … telling him why you should be one of the three lucky boys chosen, and you could win this chance of a lifetime! She stopped mid-stride. “So, it’s just lucky boys, is it? Not lucky boys and girls. No fair!”

Crumpling the offending section of the newspaper, she flung it into a heap on the floor. Rex picked it up and tried to hand it back, but Natalie’s mind was not on her dog. He dropped it and sat forlornly looking up at her.

It was happening again, wasn’t it? Another door slamming in her face that said, ‘Girls Not Allowed!’ What about all the girls who would love this adventure? Don’t they know girls have dreams of cowboys too? She sure did. She would adore riding into the sunset or the sunrise, or even the fog, if Tex was riding beside her. How she’d love to slip on buckskins and jangling spurs, feel the flap of leather against her legs, her face

shaded under the broad brim of a Stetson hat. And once that sun had slipped over the

horizon, she’d consider it heaven to just laze around a campfire while some old harmonica wheezed melody to the rising sparks and the stars above. Natalie sighed at the wonder of it knowing that’s exactly what she wanted, given the chance.

And so help her, she would have that chance. She snatched up the crumpled paper and stomped into the kitchen, Rex trailing behind her. She yanked spatulas and spoons out of the utensil drawer, tossing them onto the counter, in search of a pair of scissors. Then, brandishing her cutters, she smoothed out the page as best she could, slicing up one side of the contest ad and down the other. Rex pushed against her legs, trying to lick her hand and as much of the paper as his tongue could reach. Together they made such a mess, with Rex’s mouth in the way the whole time, that she ended by stuffing the rest of the mangled paper into the garbage hoping that no one would miss it.

Dear Tex, Natalie began, upstairs at her desk hunched over a sheet of her best writing paper, her hands still shaking with emotion. She regretted the butterflies on the corners, but it was all she had. My name is Natalie McIntyre …

Natalie stared at those opening five words for several seconds. What would the contest judges think when they saw that a girl had written in? Would they just toss her letter in the waste basket?

She sighed and moved on … I have been a fan of yours all my life. This would be about four years she figured since she’d seen his first movie when she was eight. I’ve always wanted to meet you and ride a real live horse. And I’d love to play the guitar a little too… But probably everyone who wrote in could say that. She’d need to do better to make the judges care. She chewed on her pencil and began to stray from the truth. You see, my parents don’t have enough money she wrote more slowly … for riding lessons … or music lessons … and then, even more slowly … My mum … has to work as a cleaning lady at the West Shore Hotel because … Wow, what was she saying here? Her mother working as a cleaning lady? She would die first.

Natalie felt the pulse in her neck quicken. She paused and caught her breath, then wrote … my dad can’t work … since he came back from the war. Yikes, that was another whopper! She covered her mouth as if the words had been spoken aloud. Now her dad had fought in the war, but in the Navy and, though often in danger, he had never been wounded.

But Natalie was on a roll now and the ideas just kept coming. She couldn’t stop herself. It was the next part, though, that made her most nervous because it was actually about Uncle Billy; her best friend Rhoda’s Uncle Billy, that is, and had nothing to do with her father at all. Rhoda had told the class about him for a Remembrance Day assignment and his story was so heroic it begged to be borrowed. Her pencil raced on.

My dad was a commando. He fought at Dieppe in 1942. His unit captured a bunch of

German guns so our soldiers had a chance to move in closer on the enemy she wrote with mounting excitement but, in the end, he was badly wounded and got captured. Natalie felt a surge of guilt writing these words yet couldn’t help thinking that perhaps, if Tex read her letter, he would understand exactly what ‘her father’ had been through. Tex did plenty of fighting for law and order in his movies. And then he was thrown into a prison camp, she continued, spinning out the horrifying tale. Nobody there did much to fix him so his wounds never healed the way they should have.

Perhaps at this point Natalie should have realized she’d crossed the line; that the hoped-for outcome would create far more problems than she could handle. But in her excitement the doors of reason had clicked shut and she was deaf to any protest from the other side. So, you see why it is so important to me to have the chance to meet you and Buckshot and ride across the prairie the way my dad never could now. He loves your movies too

and he really wants me to win. If I did, I could bring home pictures to show him how my dream came true.

Her pencil pressed more heavily on that last word and the lead snapped. She sharpened it in some frustration, then signed the bottom of the page: Natalie Elizabeth McIntyre.

NATALIE ELIZABETH MCINTYRE. Her name burned through the paper like a brand. She stared at the so very girl name and felt her chances evaporating. She crossed

out Elizabeth. It was still a girl’s signature, though. Was it even worth the cost of the stamp? 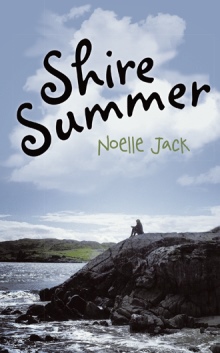 Obsessed with meeting her cowboy hero, 12-year-old Natalie opens a real Pandora’s Box with her letter to the judges at The Tex Canyon Foundation. In a misguided effort to impress them, she lies about her parents and her brothers and most critically her best friend’s uncle. And all this before passing herself off as a boy.

When confronted with these falsehoods, Natalie’s only escape is to design an even more complicated set of untruths which compel her to face the young soldier whose identity she used in her letter! Only then does she learn what a real hero is made of. But is she too late to set the record straight? The alarming unspooling of her plans and the shaky reconstruction of a more admirable outcome drive the plot forward.

It is a tale of pathos and humor, family drama and friendship that includes a cast of characters from all walks of life. Set in Montreal in the early 1950’s, this story lives and breathes the atmosphere of that postwar city.

“In this wonderful book, Noelle Jack weaves a story that is excitement-filled and deeply heartwarming. Each character brims with personality, and the compelling friendship between Natalie and Rhoda makes their efforts to comprehend and help to heal the wounds of war, unexpectedly credible.” —Robert Bell, author

Noelle Jack A career teacher and librarian, NOELLE JACK has loved books and writing all her life. Her family immigrated to Canada in the early 1950’s but instead of the promised ranch in Alberta they settled in Montreal. The spirit of this time and these places live in the pages of Being Pete, her second novel.