Book I of the Hacker Trilogy 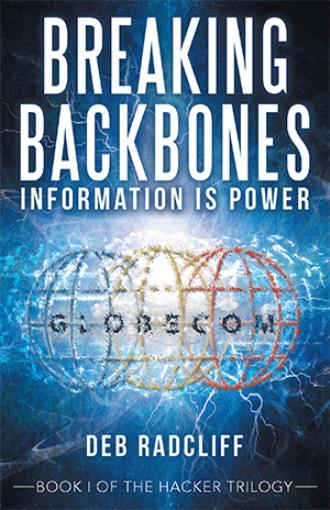 
The sound of gunfire spurs her on as Cy programs furiously into her wrist device. She is crouched behind a cinder block enclosure normally used for GlobeCom waste recycle. Bullets ricochet off the cinder block walls in little puffs of dust all around her. All the while, a drone war plays out above.
As Cy prepares to execute her code, her fighters are throwing everything they’ve got at the GlobeCom drones—modified semiautomatics, hot lasers, drone signal scramblers, and their own home-built fighting drones, which are woefully outnumbered.
This is Operation Backbone, a hacker war seventeen years in the making.
Information is power, as the hackers say. In a system ripe for abuse, GlobeCom has taken over most of the world’s data and now controls the global population through human chip implants called unique identifiers, or UIs. At this moment, dozens of hacker strike teams around the world are attempting to relieve GlobeCom of its iron grip on humanity through a global, coordinated attack.
It’s five in the morning, nearly dawn at the Oakridge hub where Cy is flanked by her fellow hacker freedom fighters who duck and fire from behind the waste bins. This campus houses the largest computational system in the United States and was primary headquarters for the former US National Reconnaissance Office before GlobeCom took control. Now it’s one of dozens of GlobeCom data centers around the world.
The hacker team members wear copper mesh masks to scramble GlobeCom’s facial scanners. The mask is making Cy feel overheated and a little light-headed.
“You said the window is two minutes, right?” Cy shouts to her wingman on the left named Des (short for Des0l8tion).
Des taps her once—for yes—on her shoulder.
Beside Cy and to her right, Allure is directing their action through her Visual Aid Goggles. She is also feeling the heat. She raises her face gear for just a second to catch her breath.
“My VAGs are fogging,” Allure says, fanning her face with her hand before dropping the mask and VAGs down again.
Wiry and quick, Allure stands six feet tall without shoes and weighs a scant 130 pounds. She is dressed in battle fatigues with her flack vest cinched tight like a corset, emphasizing her long, lean shape.
In another garbage enclosure across a narrow drive from them, Cy’s two other team members, Skew and Elven (father and son), are hacking GlobeCom control signals to drop the GlobeCom attack drones from the sky and mess with the automated guns firing from rooftop turrets around them.
From his side of the enclosure, Des nods for Elven, who then switches interfaces to take control of Des’s fighting drones so Des can focus on the suicide birds.
“Starting countdown,” Des shouts above the din so Cy can hear him.
Des reaches his muscled left arm over Cy’s right shoulder, resting it there familiarly. Steering his drones with his right hand, he raises his fingers on his left hand so Cy can see him counting.
“… three, two, one.”
The suicide drones slam the wall in formation and explode with a deafening boom. Cy can’t look just now, but she swears Des must be smiling, given how much he loves blowing things up.
The explosion clears a ten-foot hole through the back wall to the data center. As the dust settles, they see the GlobeCom’s skeleton crew members scrambling out through the interior door to the lobby to get away from the destruction. Allure, still directing through her VAGs, watches the last person exit before the door automatically locks behind him.
With the reinforced wall out of the way, Cy’s malware hijacks the emergency communications network through a proximity attack, shuts it down, and hops into GlobeCom’s building and security controls. From there, the malware turns off the temperature controls and fire-suppression systems before spreading to thousands of multiprocessing and quantum computing systems racked floor-to-ceiling in a cooled, warehouse-sized server room.
As Cy’s code executes, Allure monitors the heat signatures in the data center.
“Wait. Wait! Someone’s still in there moving around,” Allure yells.
“Shit!” Cy responds. “There’s no time for this.”
Allure executes another command, and then the door unlocks and opens. She adds, “OK, OK, I’ve got it.”
The trapped data analyst, a young Asian woman, races out through the door, which shuts and locks behind her.
“So, you sure there’s nobody else in there we don’t know about?” Cy asks.
“No, there’s no one else. The only heat signatures I’m picking up are the overheating servers,” Allure responds.
As the malware spreads across the systems, a military-grade wipe-and-destroy program erases and shreds the data and the operating programs. It then reaches down to the hardware, causing the electronics to pop and catch fire. For good measure, the malware also follows the data pathway to off-site backup systems, where it repeats the same process.
“Done!” Cy shouts, lifting her mask so she can breathe.
The sky is dawning, and Des looks up worriedly at more incoming GlobeCom drones. “We’ve got to get a move on!” he says.
As they pull back, Allure, who’s as tall as Des without her heels on, raises a fist in defiance and shouts the hacker creed. “Information is power! Information should be free!”

A hacker war seventeen years in the making erupts after GlobeCom takes over the world through human chip implants.

As dozens of hacker strike teams around the world attempt to relieve GlobeCom of its iron grip on humanity through a coordinated attack on its data centers, Cy is gravely injured and her husband is killed in the attack.

At his funeral, Cy learns the hacker clans are now going after her secret spouse, a chief security officer from GlobeCom’s China hub who has been anonymously feeding the clans inside information to aid their cause. Without any idea the China hub’s CSO is their secret source of information, the hackers leave in the middle of the night to intercept him at the DC hub. Cy realizes they are most likely walking into a turf war between global powers with deep resources and state-of-the-art weaponry. With time running out, Cy must dispatch another team to rescue her secret husband and the clan members converging in DC before she loses nearly everyone she holds dear.

In this exciting cyberthriller, investigative reporter Deb Radcliff tells a gripping story that raises important questions around invasions of privacy in a global bid for power through the use of technology.

Deb Radcliff is the first investigative journalist to make cybercrime a beat. Since 1996, she has been embedded in the hacker and law enforcement communities learning their techniques, lifestyles, and philosophies that make them unique. Radcliff has won two Neal Awards for investigative reporting, and feels one of her crowning career moments was addressing engineering students and faculty at West Point Military Academy in 2001. For more, visit www.debradcliff.com.