Breaking Backbones: Information Should Be Free

Book II of the Hacker Trilogy 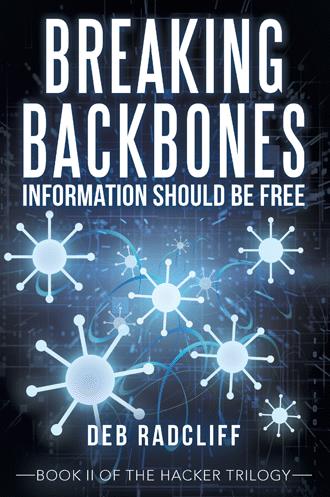 A skinny tweaker rattles a locked gate at the end River Road. It’s just after three in the morning, and brothers Adam and Michael are amusing themselves by observing the tweaker through Adam’s drone. The drone is camouflaged to blend in with the forest and sky around it, and is nearly silent, with just a whisper sounding from its spinning rotors. So, the tweaker has no idea he’s being observed.
Despite the darkness, the drone’s night vision is impeccable. Michael and Adam see everything—even too much—including the tweaker’s clumpy yellow hair, his brown rotting teeth, and his wrinkly little butt cheeks at the plumber’s crack. It’s clear that the guy is an archetype that Adam and Michael have seen around their camp before.
“How old would you say the dude is?” Adam asks Michael.
“Probably only thirty, but he looks more like sixty,” Michael responds.
Adam pans the image back to get a look behind the intruder. As the view expands, they see a 1950’s-era Ford pickup that was once powder blue, but the exterior of the antique truck is mostly rust now.
“Enlarge,” Adam says to his controller.
As the image expands, they see at least a dozen guns, mostly old hunting rifles from decades ago, strewn carelessly in the back of the truck. An ax, bow and arrows and a couple of other interesting weapons round out the stash.
“Sheesh, everything but a grenade,” Adam says. “Wait! I do see a grenade. I say it’s time to call the dogs.”
Michael smiles wickedly. This is always his favorite part. “OK. But lights off for maximum effect,” he snickers.
Michael’s smile is big and white-toothed in the glow of the computer screens as he directs Root and Admin, the camp’s two canine bots, to make their way toward the front gate from the far ends of their sixty-acre property. Root reaches the gate first and Michael instructs it to lurk there in the darkness. The tweaker, oblivious, turns around and walks ten steps back to his truck, then returns with an ax.
“This is going to make a good playback for the old folks after they wake up,” Adam says. “I think we should add in sound effects from one of Mane’s old soundtracks that he left with us before we had to split up.”
“How about Headhunter from Front 242?” Michael asks.
“Good one!” Adam agrees.
Adam turns the audio track on. A mild punk rock instrumental begins as the tweaker raises the ax above his head and braces his feet for the blow.
“Really? He thinks he can chop the gate down. This ought to be good,” Michael predicts.
“Never mind that the rods and crossbeams are made of invincible alloys. Yup, he’s going to give it a tweaker try anyway,” Adam adds.
Michael laughs as he readies the canine bots to strike at just the right moment. “Wait for it … Wait for it,” he says as he manipulates his controllers.
The tweaker slams the ax against a shoulder-height cross rod in the gate, and the reverse force tosses him backward onto his rump.
“Now!” Michael says.
He clicks a button on his controller, and Admin races down to Root’s side in a thunderous run. Then both canine bots appear out of the mist at the same time and shine their lights on the tweaker. All the while, the hypnotic song, Headhunter from Front 242 is building momentum in their cabin.
“…One, you lock the target.”
The tweaker’s eyes widen and he drops his ax. He looks at the canine bots, then upwards at the drone.
“…Two, you bait the line.”
The tweaker turns and dashes towards his beater truck, his pants dropping even lower as he runs.
“…Three, you slowly spread the net.”
He makes it to the truck and tries to start it, but for whatever reason, most likely because he flooded the engine, the tweaker can’t get it to turn over.
“…And four, you catch the man.”
“Rise and shine,” Michael says, as he taps another command into his controller.
The canine bots stand on their hind legs, their side flanks open and weapons drawn. At seven feet tall, they peer over the gate menacingly.
The poor guy gives up trying to start the engine and makes a run for it on foot, leaving the truck and all his weapons behind. Just for fun, Adam decides to help him along. So, he turns on his Darth Vader sound effects and directs the drone to follow the tweaker who’s booking it down the road away from them.
“Run far away and do not return. The force is strong here,” says the Vader voice from the drone. 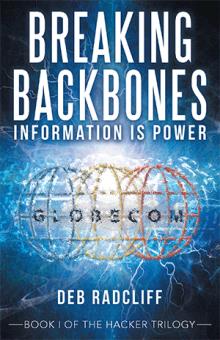 Cy is still healing from injuries that almost killed her during Operation Backbone when she is called back for a very personal reason. Her son Michael is in the clutches of Damian Strandeski, former chairman of the GlobeCom board and kingpin behind all criminal syndicates operating on the dark web.

Cy quickly deduces that her son is collateral damage in Damian’s grab for the lead developer behind a new artificial intelligence named Telos, which is more powerful than GlobeCom was. As she heads to Europe on a rescue mission, Cy’s eldest son Adam enlists their clan’s rogue copy of Telos to aggressively search for Damian. Then the AI seems to take matters into its own hands…

As they execute their plan to save Michael and catch Damian, Cy and her team face unforeseen retaliation that endangers them all. Will they finally defeat Damian, or will he once again take control of the world through technology?

Deb Radcliff is the first investigative journalist to make cybercrime a beat. Since 1996, she has been embedded in the hacker and law enforcement communities, and she has won two Neal Awards for investigative reporting. She feels one of her crowning career moments was addressing engineering students and faculty at West Point Military Academy in 2001.