The Fall of Autumn Leaves

by Ronald A. Williams 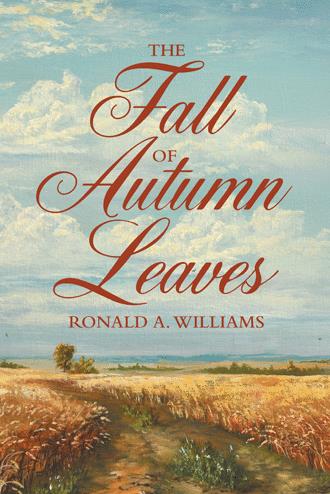 Two years into my presidency, I experienced my only truly existential moment. Four planes took off on a Tuesday morning and ceased to be metal, electronics or simply conveyors. Airborne, they became an idea that turned two magnificent structures to rubble, changed a five-pointed building into a Rorschach puzzle, and sowed a field with metallic seeds. It had been a quiet morning, and Fred was in my office going over the budget when Dan, the college’s attorney, knocked on the open door.

“Some clown flew into a building in New York.”

My first thought was how, with all that space in the air, could anybody hit a building? On the television, smoke billowed eerily from the skyscraper. The images were riveting, and we continued to watch. The second plane changed our world, for as the small (on television) silver object exploded into the tower, it became clear that this was no accident. Horror replaced curiosity, but that act still felt remote, having the plastic quality one finds in bad horror movies. When a third plane slammed into the Pentagon, that stripped away the feeling of remoteness and, by extension, of security. The Pentagon was fewer than twenty miles away.

We all stood. (Was this some animal instinct that was prompting us to run from danger? Where would we run?) The world was no longer a certainty; the moorings had been cut, and we were adrift. The news of the downed plane in Pennsylvania was not a surprise. We now expected many planes. The unthinkable had happened. America was a victim! Any ambivalence about the direction of American foreign policy disappeared. In that moment, on that bright September morning, I was fully American. Later, the analyses would begin, and the parsing of cause and effect would take hold, but right then, there was only a righteous anger, and vengeance was my companion.

For nights afterwards, F-16s, the new sound of our insecurity, crisscrossed the sky. Living under the most protected airspace in the world, I was afraid, the umbrella of assumed invulnerability in tatters. We wanted that sense of invulnerability back, and when President Bush, transformed from bumbling fool into the angel of vengeance, screamed for revenge, we were behind him one hundred and ten percent, as they say. I kept thinking of Samuel L. Jackson’s interpretation of Ezekiel 25:17 “…and I will strike down upon thee with great vengeance and furious anger those who would attempt to poison and destroy my brothers. And you will know my name is the Lord when I lay my vengeance upon thee.” Not justice but vengeance. When the president picked on Iraq, it did not matter, for fear was the key, and whenever had vengeance cared about the target? Furious anger was unleashed, and as Kabul convulsed and Baghdad burned, my anger was sated. Only then could I turn my attention to justice.

9/11 exposed my hypocrisy. Having philosophically rejected the god of vengeance, once threatened, I had called upon him, and he had answered. Three years into the war on terror, I asked, where is the god of love in all this? Had he, too, approved of the slaughter? Were we his brothers, and did he agree to strike down with great vengeance and furious anger those who would destroy us? Then, I thought, “…you don’t count the dead /when God’s on your side.” Dylan’s searing line stopped the madness that was growing in my mind, though not the disease in my body. My prostate had suddenly grown to the size of a mango, and I could not be operated on. Worse, the examination revealed pancreatic cancer. It had metastasized, and the miracle was that there were no debilitative effects. Yet. These time bombs lived inside me now. Life, I thought, is just a slow path to death. I divorced myself from the act of vengeance and came to believe in peace, marching to stop not only this war but all wars.

The fury of the wars in Iraq and Afghanistan, the genocidal conflicts in Bosnia and Rwanda, the three million dead in the Napoleonic wars, the seventeen million in World War I, the eighty million in World War II, and on and on, made me wonder in whose image we were created. We had developed the capacity for murder on a scale that should be unimaginable and yet was not. Where had the dove disappeared to? Had he, too, been cowed by the god of vengeance? Was he sitting meekly at the right hand while we murdered in his name? Where was Nature’s gentle voice that I had encountered on that acid trip? That voice had not wanted our human sacrifice. It had exuded a warmth that carried the scent of cinnamon and roses. It was all things. Everything was transmuted to Its essential vibration, the frequency of which was love.

Cameron Walkes is a Barbadian-born novelist who hasn’t sold anything for nearly a year when he is encouraged to write an autobiography. A reluctant Cameron knows he is facing many obstacles. What lessons could he teach? How could he explain the recurrent dreams that had gradually increased his stress? Despite his trepidation, Cameron writes the first words of his autobiography later that night.

As his life story laboriously begins to take shape, Cameron traces his development from a poor fishing village in Barbados, through athletic and teaching careers, and finally to attain a role as president of an American college. While chronicling his pursuit of the American Dream, Cameron also details why he left academia to take up writing as a profession, and shares a glimpse into his mindset as his physical prowess declines, leaving him with no choice but to face his own mortality. But just as life comes full circle, fate intervenes and provides an unexpected ending to Cameron’s story.

In this intriguing novel, a Barbadian immigrant who reluctantly begins penning his autobiography in an effort to boost his writing career embarks on a journey inward to reflect on his experiences.

Ronald A. Williams is a retired college president and author of six novels. His novel, The Dark Land, won the Prime Minister’s Prize in 2015 and was runner-up in The Frank Collymore Literary Competition. Ronald is married and has two daughters and two grandchildren.