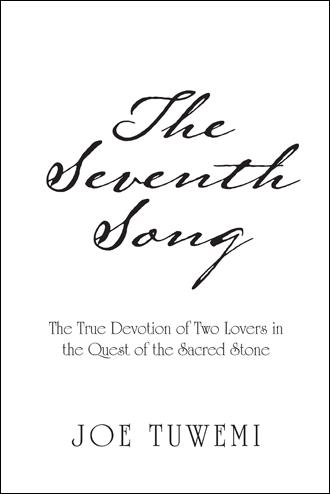 
Set me as a seal on your heart,
as a seal upon your arm
for love is as strong as death,
and desire is as fierce as Sheol.
(Song of Songs)


Late in the morning, the slender girl was walking swiftly with the summer breeze playing in her long dark hair through her favorite meadow where the wildflowers of many colors grew, red and blue, yellow, white and purple, moving in the warm breeze, and the flowers she regarded as her friends were thriving still, though it was late in the summer season, and she was walking with her hands held out from her sides to gently touch the tops of the flowers, as if she were a hawk on the wing in the wind, when she first saw the mysterious child and stopped. He was a good-sized boy, thriving like the wildflowers in summer, strong and healthy, perhaps three or four, with olive skin and longish hair as black as hers, dressed in a dark blue robe woven and decorated with seven white stars, standing in the wildflowers as if he came from nowhere and was waiting for no one except her, unconcerned and unafraid. As she approached, he looked up into the sky to her right and without thinking she looked up toward that direction too and saw an eagle landing in her nest in a tall tree top of the forest, her gaze quickly returning to the child, who was now looking at her, neither of them yet speaking, and her eyes and her face made an expression of questioning, as if to say Sooltee (hello) and who are you?, and he gave a slight shrug of his shoulders in response, but his dark eyes were intelligent and quiet as they met hers which were dark but shaped in a way reminiscent of a hawk, and she felt the quietness of his eyes go deep within her, as each looked into the eyes of the other in a long moment pausing time, in that extended moment forming a mysterious communion which would never die, and though she was only a child of seven, she felt deeply that they somehow belonged to one another, as if she had discovered a lost relative, someone not seen for a long time, but an essential relation whose long absence had not lessened their connection, as if they both had returned home from long journeys to find each other again, and it was a relief to be at last together again with someone she had never met before today, yet it was not a strange impression at all, but the feeling seemed as familiar as the rising of the sun at dawn. The two children felt this connection intuitively, without discursive process in thinking, this remarkable communing without yet speaking, as a powerful current flowing underneath the surface of the sea of their childhood innocence. The small red birds nesting in the branches of the trees who lose their leaves in autumn were singing their morning hymn behind her in the forest as the light of the rising sun reached over the tall evergreen trees in the east, and she felt the warmth on her lovely face and the light in her dark brown eyes.

It was all right then. She felt somehow he trusted her, so she smiled with her child’s unforced smile and he smiled as openly in return, and she walked over to the boy and took one of his hands in hers, and she called out for her grandfather to come to them from the forest trees, her voice sounding like chimes on the wind, not urgent but firm, and the old man with white hair came to them directly in response to her calling, walking lightly out from the tall green trees toward the girl who awaited him with the boy whose hand she still held, as if she were wary that he might disappear as mysteriously as he had appeared like a spirit of the wildflowers before her grandfather’s arrival. Sikeemila, what is this--have you found a friend in the flowers? Grandfather asked, and he hung his bow over his back and smiled to let the boy know he was among benevolent people, that he had nothing to be wary of, for Grandfather, who was an old warrior of white hair and many battles, could tell that this mysterious little child from nowhere, discovered all alone in a vast wilderness, was unafraid, and the child returned the smile to the old man. Then the old man saw the seven stars on the child’s robe and in his customarily mild manner expressed his astonishment, whispering under his breath--the ancient sign--have the Tisah Nem returned?--as he looked for a moment all about him in the foothills, then returned to his gentle welcoming of the mysterious boy.

Joe met Astrid when they were children by the sea, after his adoption from the orphanage by the older couple who became his devoted parents, where he lived with them in the old house which had been built on the outlook above the ocean shore. His room was upstairs and the big window looked out across the sea toward the horizon, and when he was there he often sat in his chair looking far out over the waters at the distant ships passing by, or gazed down from the outlook toward the shore where the waves struck the great rocks and washed over the dark sandy beach to the right of the rocks which ran back to the little seaside town of Orca on the ancient Salishan Sea, down below the outlook set back high above the tide’s evening rising. The town was a place visited by tourists in the mild heat of the summers, but inhabited always by some two thousand citizens, many of whom lived where generations of their families had lived and died, flowing in and out of time themselves like the ancient tides that were so much a part of their lives.

Two devoted lovers live twice, once as ancient warriors and once living quiet lives in the twentieth century. In ancient time, Sikeemila comes upon young Tay Nee in the woods. Along with her grandfather, she welcomes him into their small family. They are bound by a sacred quest but hated in the world of men for their blood and hunted by those who would oppose them.

In the twentieth century, Joe and Astrid meet as kids by the sea. Childhood sweethearts, they grow up to marry and have children of their own. Joe is a quiet academic engaged in obscure scholarship with radical historical implications, while Astrid is a gifted artist whose work gains worldwide interest.

The two disparate lives of the lovers are joined through uncanny dreams and are ultimately unified by a vision, revealed to be the source of the quest for the sacred stone.