Helping Others Be Successful and Finding Selflessness in Business, Politics, and Life 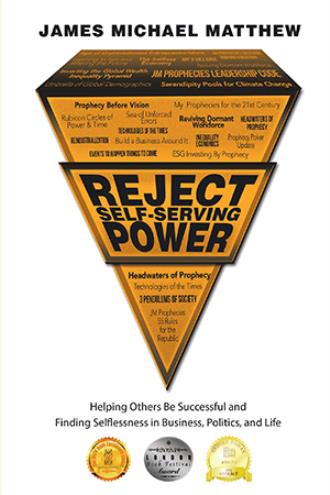 Through this book the Author carries us with him and his Company’s quest to invert the global wealth inequality pyramid. Power Corrupts. Accumulating self-serving power to the detriment of others is a major reason the Wealth Inequality Pyramid has existed for millennia, reaching its epidemic point today. This book analyzes how Self-serving power always ends badly because it ultimately leads to mistakes, wrong decisions and forcing bad ideas on to others. Power strategies begin to fall apart when the person leading the power accumulation and/or their followers begin to make mistakes, wrong decisions and pursue bad ideas, solely to stay in power and enrich themselves and those supporting them. At that point it becomes obvious to others outside the power structure that the person has lost their way and is pursuing power only for their own personal advancement, wealth accumulation and dynasty.

Most people are familiar with the phrase: Crossing the Rubicon. For those who are not, it began with Julius Caesar’s crossing the Rubicon River in Italy in 49 BC to cross into Rome. This led to Caesar becoming Dictator of Rome. The Author borrowed this phrase to explain what he calls the Rubicon Circles of Power and Time. These circles represent periods of time that all self-serving power individuals eventually encounter, and are described in the following.

Inner Circle: Period of Positive Results – Many power strategies yield positive results in their early stages. These positive results almost always occur as the result of replacing an already existing crisis, corrupt regime or combatting an unpopular or negative period in history. Adolf Hitler had the Great Depression and The Treaty of Versailles. Joseph Stalin had Hitler. Al Capone and Bugsy Malone had Prohibition.

Rubicon Circle: The date that the self-serving power individual commits their “Code Red” moment (see Book 1.) On that date the self-serving power person’s fate is sealed. They will fail and be removed, generally in disgrace or even dead. Unfortunately, much like Caesar crossing The Rubicon River, the pain does not end on the date of the Rubicon Circle crossing. There will be a subsequent period of clinging to power at all cost, during which everyone is negatively impacted.

The Author provides a series of tangible projects, ground breaking leadership and new economic models for the 21st century. He offers what he calls The Selfless Economy will soon replace self-driven power opportunists in business, politics and life. His list of Prophecies for the 21st century includes: Prophecy Number 7: Governments, Political Parties & their Candidates, Companies, Other Organizations and Individuals who select self-serving power accumulation and self-wealth accumulation strategies to the detriment of others will be abandoned and replaced with Leaders who Embrace Leadership and Reject Self-Serving Power.

The Author builds on his teachings from Prophecy Before Vision to complete your training of his JM Prophecies Leadership Code, which is:

1. Prophecy MUST Come Before Vision – learn to see and alter the future;

2. Embrace Leadership – Leadership is ALL about helping others be successful;

3. Reject Self-Serving Power – because the accumulation of self-serving power as a leadership strategy always ends badly for all those involved.

A few of the many solutions he provides to transition us all to The Selfless Economy are included in the following.

• There are winds of change building that will change our Country and the World for the next several hundred years. The Author calls these winds of change: The Age Of Unprecedented Entrepreneurialism.

• Anyone who believes the great resignation is short term needs to read Chapter 4. Modern birth control and contraceptives have changed everything. Humanity Itself Has Changed!

• My Prophecies for the 21st Century.

• JM Prophecies 55 Rules for the Republic.

• Case Studies: Helping Others Be Successful.

• The Re-Industrialization of America.

• Doers Not Talkers or Make Believers.

• It’s Not About Race It’s About Leadership.

• Why Still Doing Business With China?

There are two very distinct sides to the poker table for the second biggest prophecy poker game currently being played out in the U.S. On one side are players like the Author who believe investing in China is akin to throwing your money away and jeopardizes the security of the Free World. On the other side of the table are some of the largest investors in the World who believe investing in China is a prudent strategy. This 180 degree dichotomy is fascinating. To be sure, both sides fervently believe they have the winning hand. One side is going to win big and the other side is going to lose big. Only time will tell who wins and who loses.

Climate Change – Events to Happen or Things to Come?

At JM Prophecies we believe:

1. Ocean levels will rise even if and when zero carbon is achieved. History’s past chain of events are just too long and strong to change that outcome by reducing carbon now or in the future. 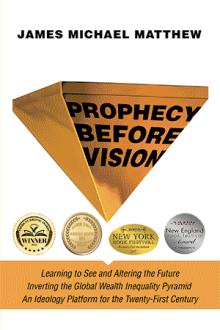 James Michael Matthew builds on his teachings from Prophecy before Vision to expand on the JM Prophecies Leadership Code, which is:

1. Prophecy must come before vision. Learn to see and alter the future.

2. Embrace leadership, which is all about helping others be successful.

3. Reject self-serving power as it always ends badly for everyone involved.

The author applies the Code to explain how JM Prophecies Corporation seeks to invert the global wealth inequality pyramid. You will learn about a variety of proactive projects and ideas designed to rebuild the United States of America.

You’ll find out how accumulating self-serving power to the detriment of others drives wealth inequality. Whether you work for a public institution, commercial organizations, or elsewhere, you’ll find strategies to help others as you find more meaning in your daily life.

Join the author as he shares contrarian thoughts and strategies to invert the global wealth inequality pyramid.

James Michael Matthew is the founder and chairman of JM Prophecies Corporation. The company’s mission is to invert the global wealth inequality pyramid. You can learn more about JM Prophecies at jmprophecies.com. We invite you to contact us and join us in our quest.

Mr. Matthew graduated from the Johns Hopkins University with a masters in biotechnology enterprise and entrepreneurship. He has an MBA from Michigan State University and a bachelor of arts in accounting and auditing from the University of Illinois-Springfield. Mr. Matthew is a member of the National Society, Sons of the American Revolution.